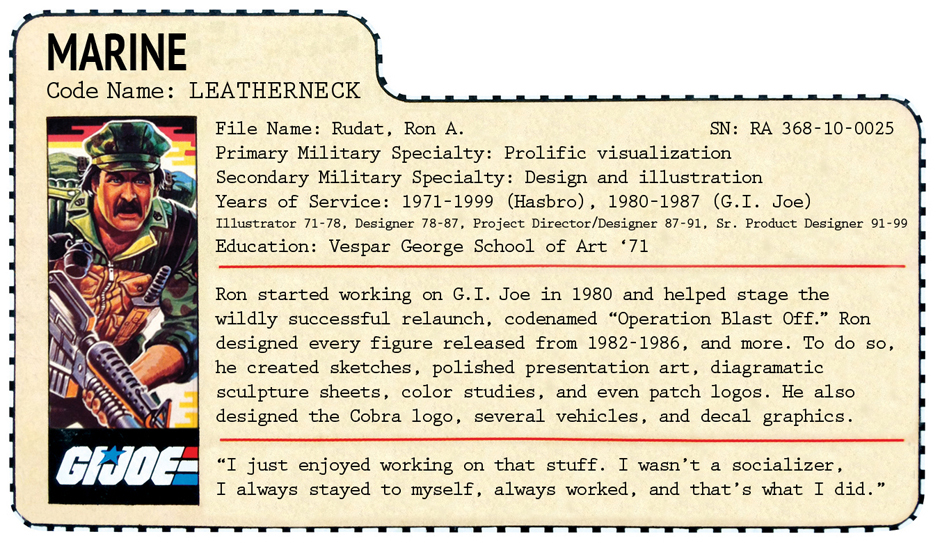 Ron Rudat was the figure designer behind G.I. Joe: A Real American Hero. From the rebirth of G.I. Joe in 1982 until he moved off of the brand in 1986, every figure sprung from his mind onto the page. He also designed vehicles and decals, books, and the Cobra logo!

From Art School to A Real American Hero

Ron graduated from the Vesper George School of Art in 1971. Straight out of school, he went to work for Hasbro. Ron worked as an illustrator in Hasbro's art department from 1971-1978, illustrating accessories, instructional drawings, and retouch art. In 1978 he was transferred to Research and Development (R&D), where they develop ideas for new toys. Meanwhile, the 12" G.I. Joes of the '60s and '70s were canceled in the mid '70s, and after a brief 8" reboot from 1977-1978, G.I. Joe sat dormant for several years. Behind the scenes, Bob Prupis (VP of Boys Toys) was working hard to revive G.I. Joe. Ron joined these efforts in 1980, and the top secret relaunch codenamed “Operation Blast Off” was underway. After significant market research it was determined that G.I. Joe's best chance at profitability was to be scaled down to 3 3/4 inches. Ron was charged with designing the new smaller figures. Ron designed every single figure from the inception of A Real American Hero through the mid '80s, even though to this day he'll tell you he "wasn't a figure guy."

The Art of Figure Design

Ron helped develop the process for creating action figures at Hasbro. The artists that followed Ron used the methods that he established to ensure a consistent look across the brand and smooth collaboration across departments. The first step in the design process was R&D brainstorming sessions. Once Ron left those meetings he was free to begin research and ideation, or sketching, for each of the characters he wanted to develop. Ron would complete a handful of sketches of each character and review those with the G.I. Joe Product Manager (Kirk Bozigian filled this role for the first several years). They would go through several sketch revision cycles before arriving at the final design of the figure. Then a final pencils illustration would be created. Accessories were developed concurrently with the figure throughout the sketching phase. Once the final pencils were locked in, Ron would photocopy that illustration and create several color options using markers. These are referred to as color studies. Marketing would select the winning color study. Below are some behind the scenes looks at several figures that Ron contributed to from 1982-1994. 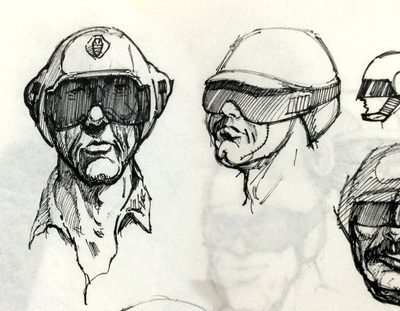 1984 Scrap Iron: Ron illustrated a dozen or so head options for Scrap Iron. Interestingly, one option features the trademark scar that did not make it into the final head sculpt. 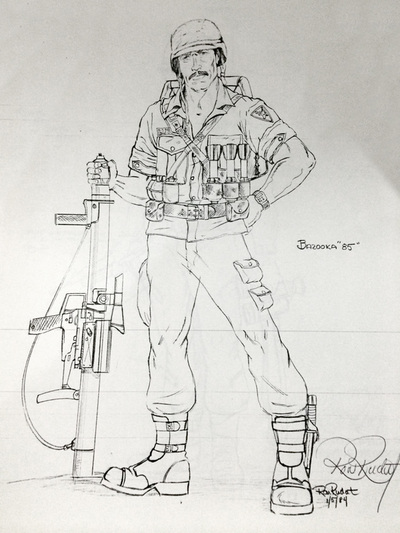 1985 Bazooka: This sketch shows two major differences from the final product. One: he is wearing a tactical vest instead of his trademark New England Patriots jersey. 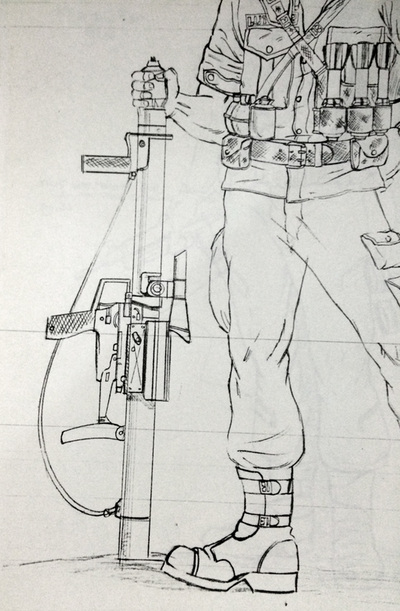 1985 Bazooka: This sketch shows two major differences from the final product. Two: he is armed with a much larger bazooka. 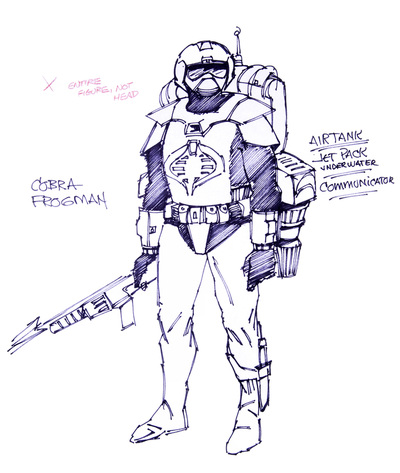 1985 Eels: the red pencil feedback reads "entire figure, not head." The rest of this sketch made it into the final design virtually untouched. I believe the head design was revisited for the 1987 Techno-Viper. 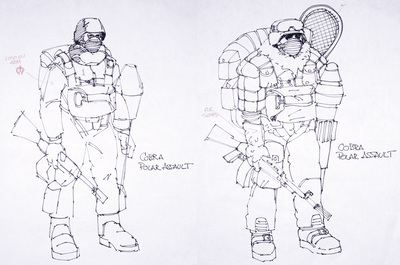 1985 Snow Serpent: these two illustrations show how Ron evolved and refined each concept as he sketched. Snow Serpent's helmet and mask looked much more like the original 1982 Cobra on the left. In addition to adding a more bulky helmet with goggles, Ron added fur, snowshoes and many more details. 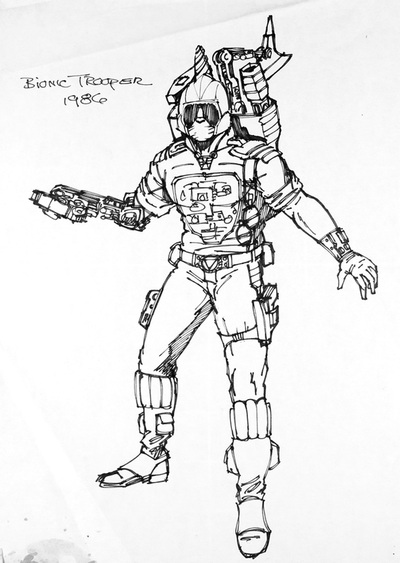 1986 B.A.T.S.: Notice it's annotated "Bionic Trooper 1986" not "Battle Android Trooper"! Bionic means "having artificial body parts, especially electromechanical ones." The term "was popularized by the 1970s television series The Six Million Dollar Man and The Bionic Woman, which were based upon the novel Cyborg by Martin Caidin, which was influenced by Steele's work, and feature humans given superhuman powers by electromechanical implants." (source: Wikipedia) Ron didn't recall having any intent that the BAT might be an augmented human at first, but it's interesting nonetheless. Bionic Trooper's left arm sure looks human in that sketch. As we all know, this concept morphed into the Battle Android Trooper. An android is "a robot or synthetic organism designed to look and act like a human." (source: Wikipedia) I guess it's for the best, so the Joes and Sgt. Slaughter in particular would have an enemy to blow up and dismantle. 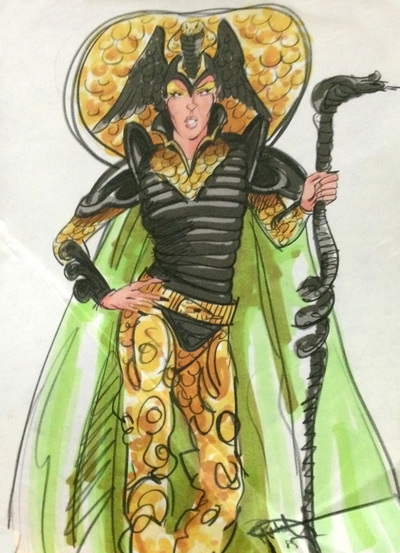 1987 Pythona (unreleased): one of Ron's last figure designs before transitioning off of the brand in 1986 was Golobulous. He also worked on Pythona (seen here), but the figure was never released. 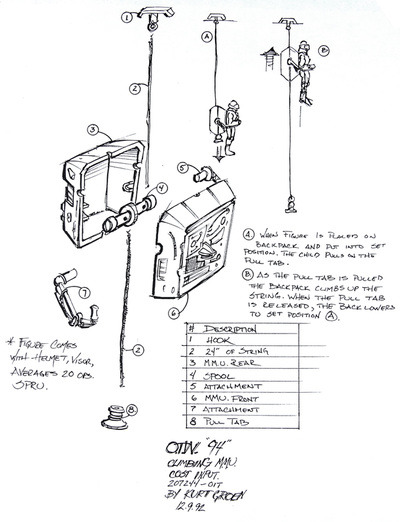 1994 Space Shot: Kurt Groen illustrated this "cosmic climbing backpack" cost input sheet. It broke down all of the parts needed and explained functionality. 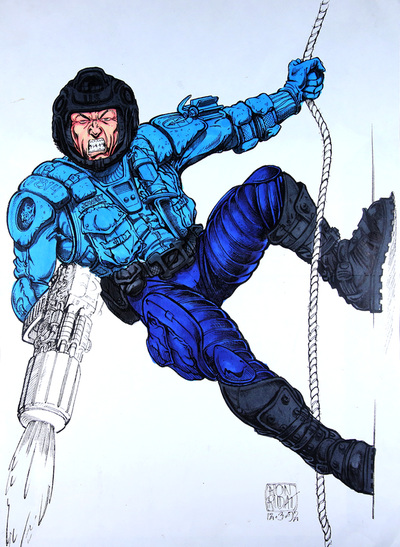 1994 Effects color study: First Ron illustrated Effects and then he used markers on photocopies to create several color options for the Product Manager to choose from.

Step 2: Refine the design and present to senior management

Once Ron and the Product Manager had arrived at a design they were happy with, it was time to sell that concept through to senior management. To do so, they created presentation art, a more refined illustration with full rendering and shaded colors.

This presentation art was also shown in meetings with costing people, engineering, and even retailers. Early on, Ron created figure presentation art (see Ace, below). As the line grew and his responsibilities multiplied this task was assigned to other artists (most notably George Woodbridge and Dave Dorman). 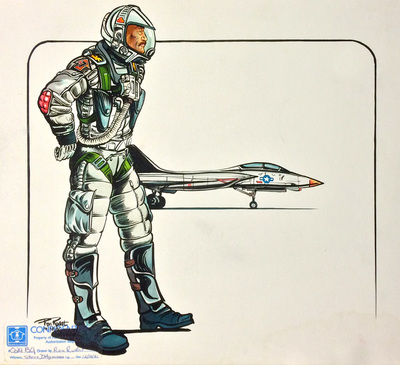 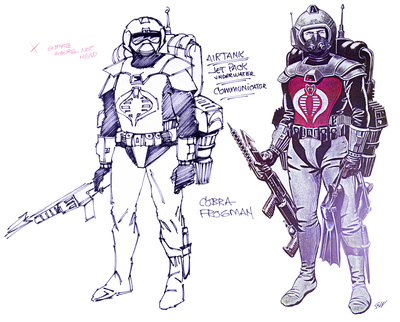 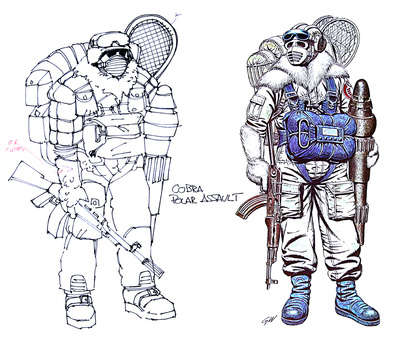 Once management had bought into the design, Ron would get back to work creating figure sculpture sheets (also know as control art). These sheets showed views from the front and back and from both sides with the arms removed. Some revisions were still made at this point, as can be seen in the Snow Serpent samples below (he was called Cobra Arctic Stormer at the time). Once completed, these sheets were shared with the sculptors that were tasked with creating the figures. Ron would work closely with the engineers when working on a vehicle, or with the sculptors when working on a figure, to ensure sure that the final product achieved his vision.

Once the Figure Sculpture Sheets were done and fabrication was underway, Ron would create a figure reference system (also known as a color chart). These charts showed: what color plastic every part of the figure should be molded in (grey accessories and aluminum figure for the Snow Serpent), where any logos or patches should be printed (Cobra logo on the upper left arm front for the Snow Serpent), and where spray ops should be applied and what colors to use (white, blue and black for the Snow Serpent). These color charts also included pantone samples and a column for comments/revisions. These charts were created to help guide the manufacturing partners in the Orient and were incredibility detailed to help avoid mistakes. Before sending anything out Ron would work with costing people to make sure he was within budget. 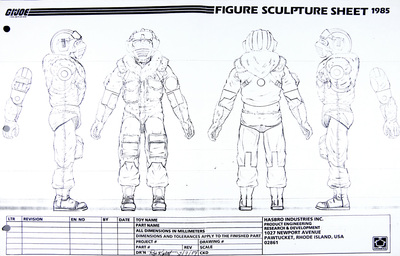 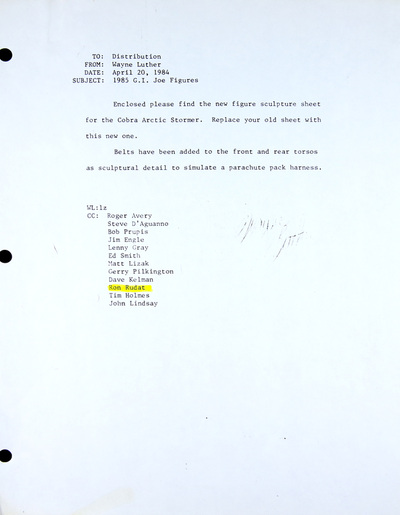 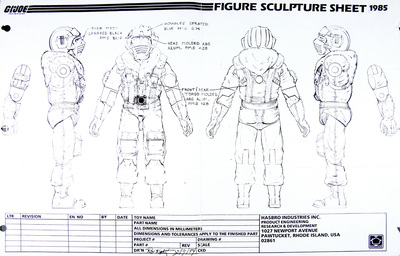 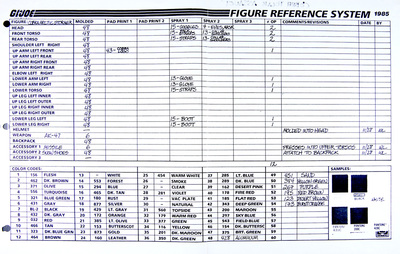 Ron worked closely with Kirk Bozigian to develop each figure. Below they discuss the R&D brainstorming cycles, the figure development process, and the revision cycles. Kirk recalls Ron's influence on the figure designers that followed and he credits Ron with developing the look of G.I. Joe in the early '80s. Finally, they discuss teaming with Larry Hama to turn Ron's figure designs into unforgettable characters.

This section elaborates on some of the figure details that Ron was responsible for in Step 1 above, from accessories to patches and logos.

Ron found inspiration everywhere. From the British S.A.S. to the NFL to Star Wars, most figures were inspired by Ron's interests. Ron was kind enough to walk through a couple dozen figures with me, and those recollections are below. A HUGE thank you to Ron for sharing!

In 1985 Ron's name made it onto a G.I. Joe file card, albeit a little cryptically. In 1986 his mustache was immortalized on the front of a G.I. Joe package, having his likeness illustrated as Leatherneck. Roll over the images below to find out more, or click the images to enlarge them. Below Ron tells why he had a personal connection to the Marines in G.I. Joe. 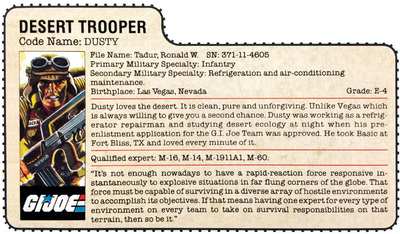 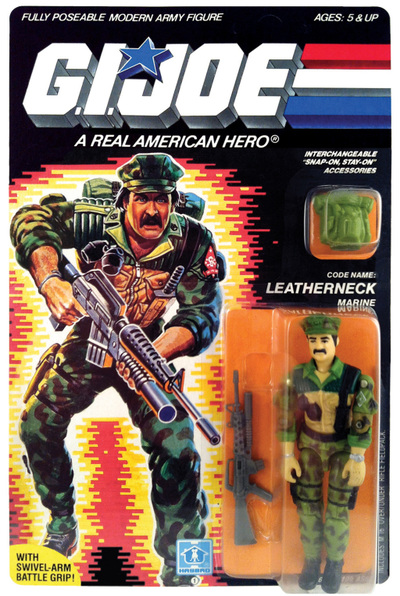 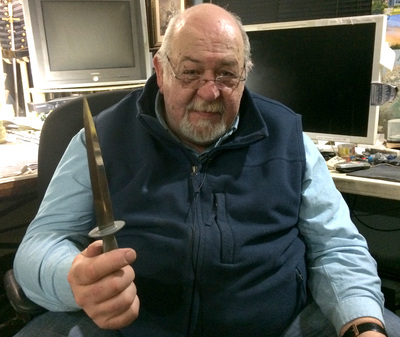 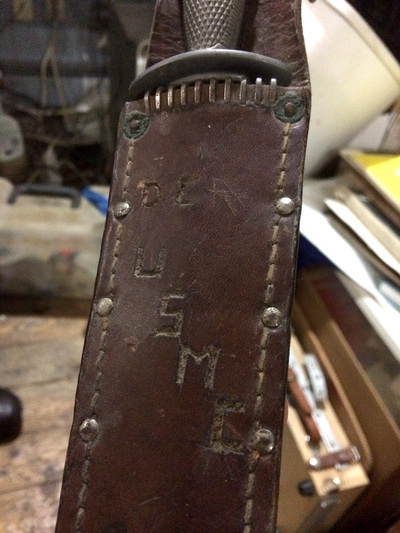 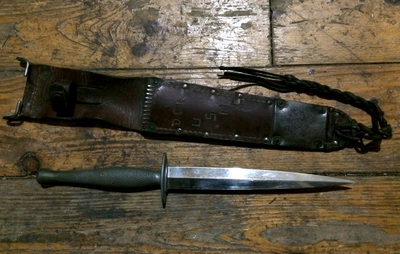 Ron and I went through Mark Bellomo's "Ultimate Guide to G.I. Joe 1982-1994: Identification and Price Guide, 2nd Edition" to try to nail down what he worked on over his tenure on G.I. Joe. He designed every action figure from 1982-1986 (except Claymore who was a combination of previously used parts). He designed these 1987 figures: Big Boa, Chuckles, Crazylegs, Crystal Ball, Falcon, Gung-Ho v2, Jinx, Law & Order, Psyche Out, Raptor, Steel Brigade (his new helmet, the rest was a combination of previously used parts), Slaughter’s Renegades (Red Dog, Mercer, and Taurus), Golobulous, and Zanzibar. He also designed Hardball who was eventually released in 1988. Ron also designed these vehicles: 1983 Cobra F.A.N.G., 1983 Cobra S.N.A.K.E., 1984 VAMP MK II (the roof, doors, and decals), 1985 Cobra Hydrofoil (Moray), 1985 Cobra Flight Pod, 1985 Cobra S.N.A.K.E. v2, 1986 Dreadnok Thunder Machine, 1987 Cobra Pogo Ballistic Battle Ball, and 1987 Dreadnok Tri-Cycle. Beyond vehicle and figure design, Ron designed many graphics for G.I. Joe, including the Cobra logo, the 1983 Dragonfly and Skystriker decals, and the 1986 Night Raven decals. These are all 30 year old recollections, so many additional contributions might have been overlooked.

Some long overdue recognition for Ron, and for G.I. Joe!

Ron will be inducted into the Toy Collectors Hall of Fame in Las Vegas Nevada on February 28th, 2015.
He'll be there along with Stan Lee and dozens of celebrities. Ron is the first G.I. Joe inductee. I think they made an excellent selection. Congrats Ron, and thank you for the countless memories! 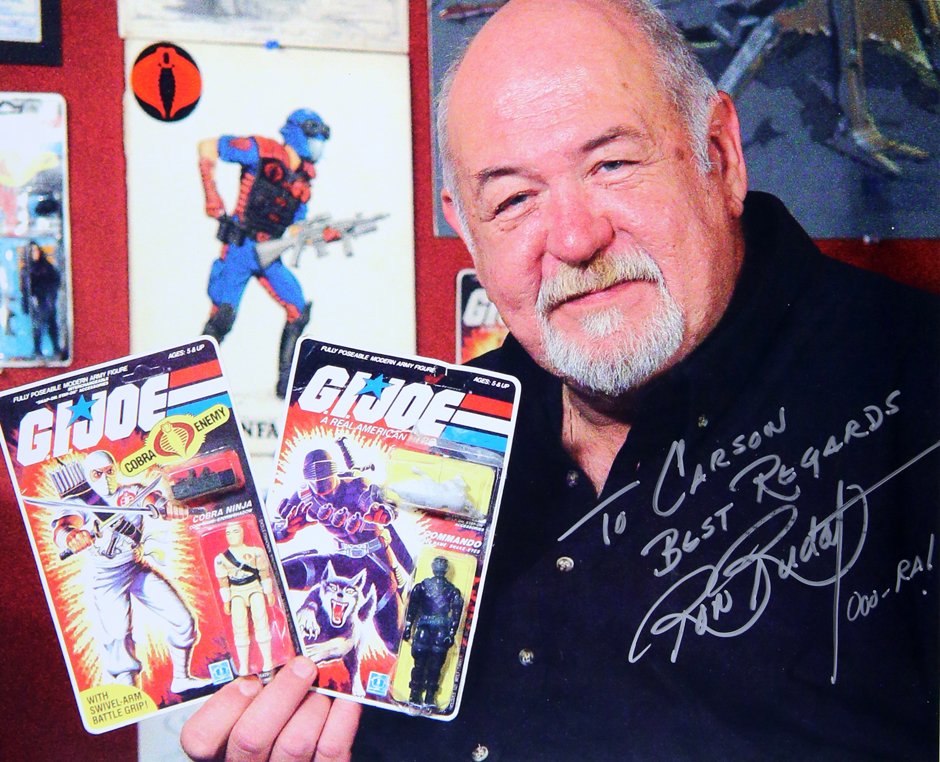 Ron was recently featured on Once Upon A Time in Attleboro, a local interest show produced by DoubleACS. The show covered his entire career at Hasbro and what he's up to now. It originally aired on November 15, 2014 and is shown here with their permission.

Be sure to check out the G.I. Joe Discussion group on Facebook, where fans and former Hasbro vets hang out and talk Joe. You are sure to see some interesting pre-production and behind-the-scenes items posted there. ​