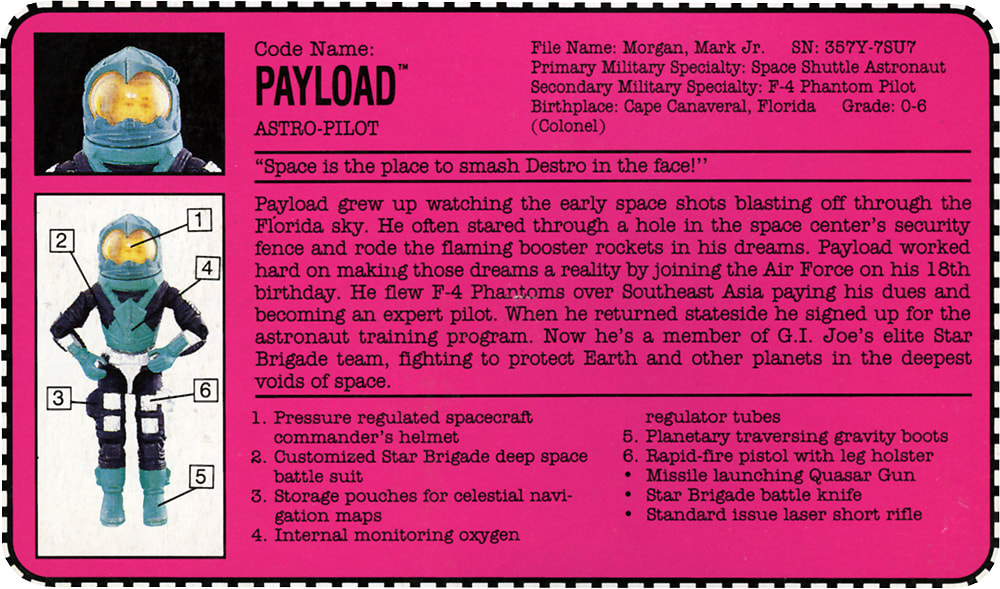 ​The Great Space Race: How Hasbro Beat Kenner in the early 1990s

Hasbro "got wind" that Kenner was going to relaunch Star Wars action figures. The G.I.Joe team sprung into action and quickly developed Star Brigade for 1993. The 1993 Toy Fair catalog did not show any upcoming Star Brigade product. Instead, a separate Star Brigade addendum was handed out. This addendum featured a preliminary Star Brigade logo and a Payload v3 paint master prototype that would never be produced. This prototype used the 1987 Payload v1 and 1989 Payload v2 mold. By the time the line hit retail, Payload v3 used the 1992 Barbecue v3 mold from the Eco-Warriors sub-line and the Star Brigade logo had been revised. The 1993 Star Brigade Fighters Assortment (Astro Viper v2, Countdown v2, Ozone v2 and v3, Payload v3, Roadblock v6, and T.A.R.G.A.T. v2) all shared the same card art illustrating the Payload v3 prototype facing off against Astro Viper v2, and the file cards featured product photography in place of unique art. These were both unfortunate firsts for the A Real American Hero (ARAH) 1982-1994 run, but these corners were likely cut to beat Kenner to the punch. Kirk Bozigian reported that "Kenner backed off. We blunted Kenner from coming into the marketplace... with Star Wars. We only held them off for a few years, but the point was it proved that if we kept our ear to the ground, if we had our intelligence out there, we could detect [and] beat back whatever is happening in the marketplace."