It's GO time! Back Operation: Recall today and help these legendary creators do what they do best, create timeless action figures! 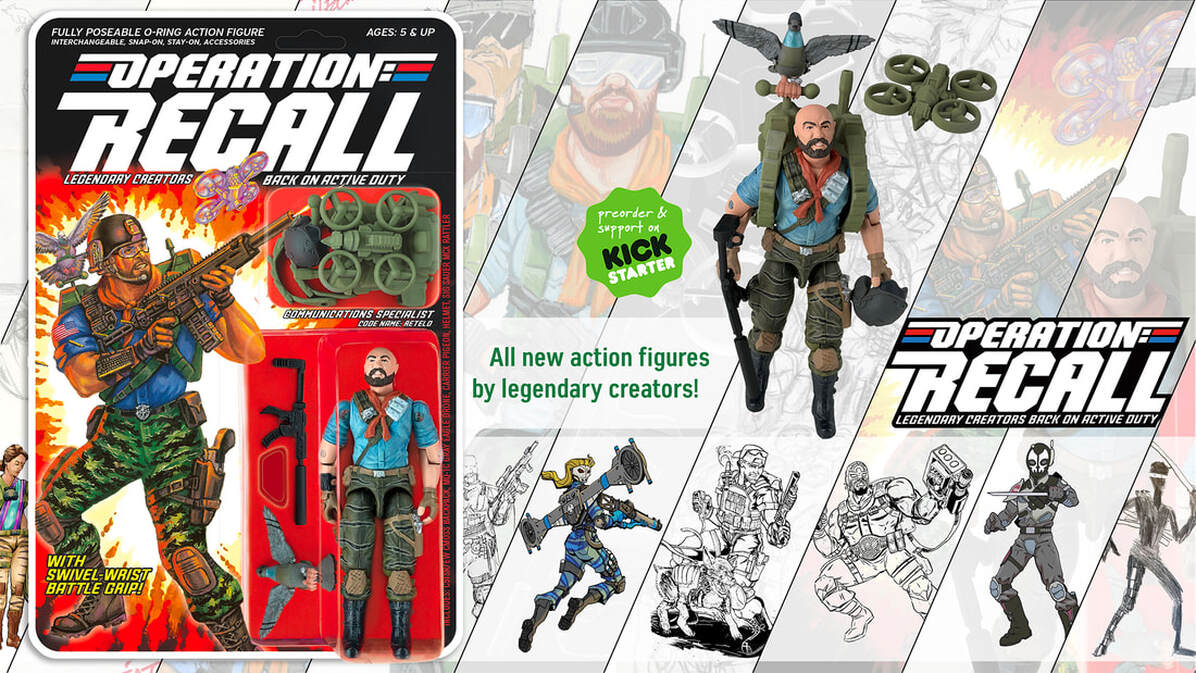 The "Collecting the Art of G.I.Joe" Omnibus Hardcover is here! Learn more and pre-order today!

Creator Profiles and Creator Commentary are integral to 3DJoes!

Over the course of the next decade we hope to interview any willing participants that were key architects of the G.I. Joe brand during the A Real American Hero era. If you worked on G.I. Joe from 1982-1994 and want to participate in the 3DJoes oral history project, please contact us through Facebook or Twitter and we will make it happen! From these interviews we will create in depth "Creator Profiles" with extensive audio interviews. We will also add "Creator Commentary" audio clips to individual figure or vehicle pages. In addition to showcasing these interviews, these Creator Profiles will consolidate old magazine articles, TV interviews and additional media from around the web. Finally, we will gladly promote other fans' efforts to acknowledge the creators behind our favorite brand and link to their content (with their permission). If you have creator focused content and would like for us to include it here on 3DJoes, then please contact us through Facebook or Twitter. We would love to team up to make this resource as comprehensive as it can be! First up are Kirk Bozigian, Ron Rudat, Guy Cassaday, Bill Merklein, and Ed Morrill. Mark Pennington's page is next!

​NEW on 3DJOES: The G.I.Joe Yearbook for Carded Figures and Vehicles and Playsets!

Destro's Dominator can outmaneuver and outgun G.I.Joe's ground forces, then convert to an attack helicopter and outfly G.I.Joe's most sophisticated aircraft. Tank mode can be seen below to the left, helicopter mode is below to the right. 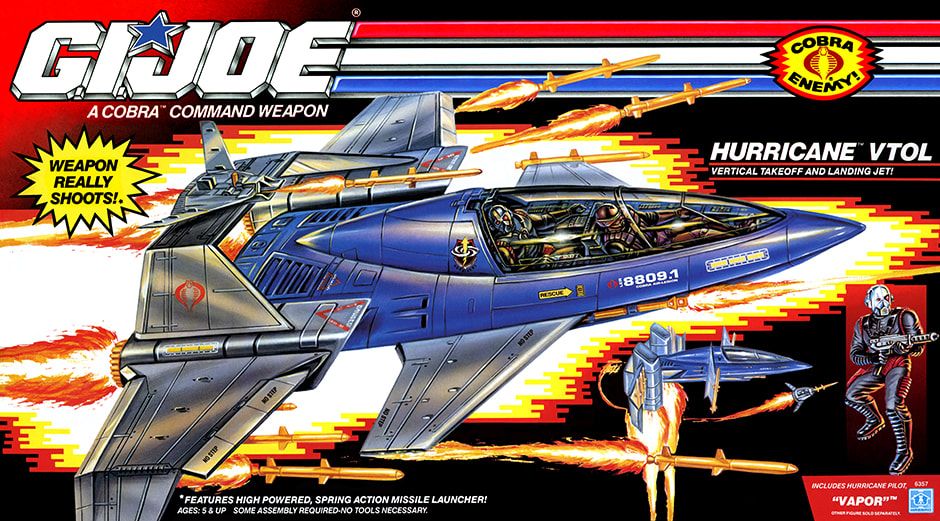 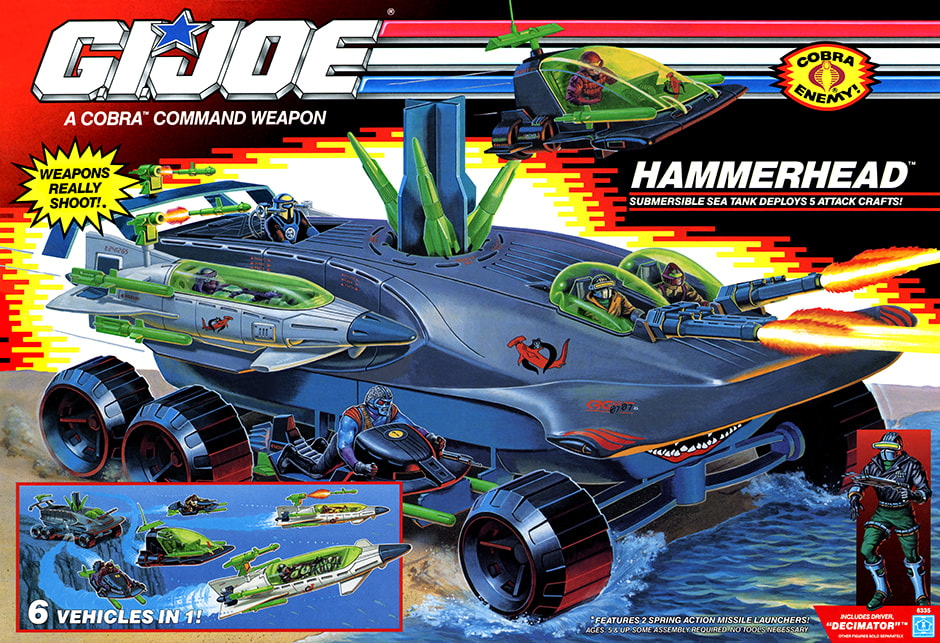 From 1982-1992, Hasbro created 10 different lunchboxes in partnership with Cheinco, Thermos, Aladdin, and SGI.
​​Head on over to the Lunchboxes Overview page to see all 10, and to learn about several heretofore undocumented variations!
The Hammer has arrived! Frank Coroneos designed this Hummer inspired beauty and invented the F.F.T. (finger flick technology) used to fire missiles!

Now you can own every piece of painted G.I.Joe art from 1982-1994 in six beautiful volumes! Preview all 452 pages at the 3DJoes Book Store!

G.I.Joe’s 1991 toy commercials changed gears and replaced animation with live-action actors and actresses and life size vehicles. These commercials were serial, a first for G.I.Joe, and told the linear story of G.I.Joe and Cobra battling for control of “Plasmatox.” Filming was completed in December 1990, in Vancouver, British Columbia, Canada at North Shore Studios, Lot 3, with Cannel Films (now Lions Gate). Kirk Bozigian, former Vice President of Marketing for Hasbro, filmed nearly 3 hours of behind the scenes footage over the 3.5 weeks of filming. 28 years later, he mailed us those tapes. Together, we premiered this nearly 30 year old footage for the first time anywhere at the final Hasbro sponsored G.I. Joe Collectors' Convention. 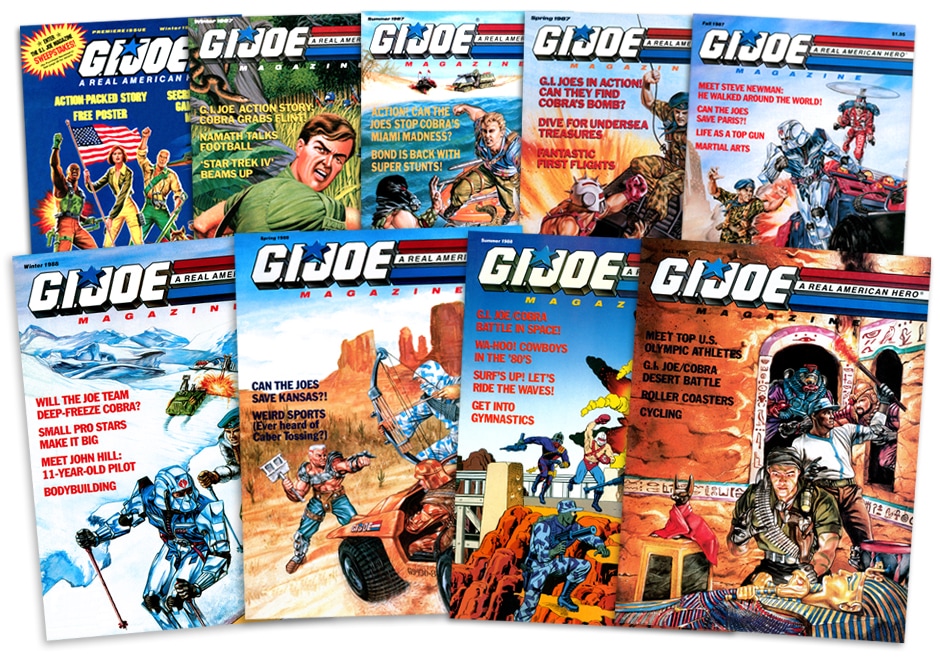 Venture into the homes of Creators and Mega-Collectors alike!

The Rolling Thunder has arrived, and with that the 1988 vehicle archive is complete!

​The Rolling Thunder is one of the largest G.I. Joe vehicles ever.  When fully extended, it measures over 3 feet in length! Within its heavily armed shell lies two Lightning Rockets packed with cluster bombs and a deployable six-wheeled all terrain scout vehicle (ATSV).

The Thunderclap has arrived, and with that the 1989 vehicle archive is complete!

The Thunderclap is three vehicles in one, each with their own defense systems! The multi-extendable, high-powered, battlefield “annihilator” cannon is the centerpiece of this powerhouse, while the the tractor provides propulsion and radar jamming, and the trailer enables infrared targeting and armament discharge.

The Razorback's primary play feature is its positionable hydraulic attack elevation mechanism. When activated, the front section elevates at an upward angle, giving the dome turret a greater range of fire. The dome turret is armed with a 205 MM, dual pulsating, anti-armor/personnel cannon equipped with a high resolution, image intensification, personnel ID system to assist the gunner with acquiring and eliminating his targets! On each side, vertically rotating missile mounts store four QVX-902 “Short Blast” surface-to-surface missiles.

Darklon's Evader features a "clam shell" styled canopy armed with two surface-to-surface missiles and two removable machine guns.
Darklon was the next in a long line of key Cobras sold with an alpha (or lower price point) vehicle. Like Zartan, Serpentor and Destro v2 before him, Darklon was a completely new sculpt with detailed paint apps, and he came with one heck of a gun. 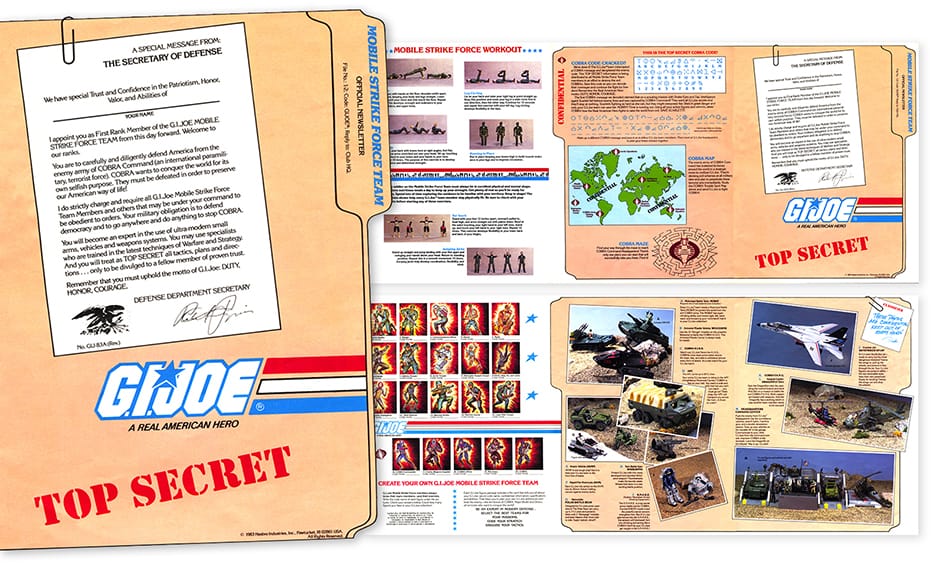 We thought we had uncovered and documented every "Mobile Strike Force Team" and "Command Post" newsletter from 1982-1984, but another one just popped up! Head on over to the G.I.Joe Newsletters page to see the to see the introduction of the 1983 figures and vehicles.

This is without a doubt the best product page on 3DJoes! We keep looking for ways to better document these toys, and this page pulls out all of the stops. ​Here’s what you’ll see on this mammoth page:

Listen 'n Fun Tripwire and the Special Mission: Brazil set came with cassette audio adventures. Click the cassettes to go have a listen!

Hasbro released 16 puzzles from 1982-1988. ​Visit the Puzzles Overview page to see them all, and don't forget to scroll down for the ExtraZoom galleries where you can zoom in on all of the details! 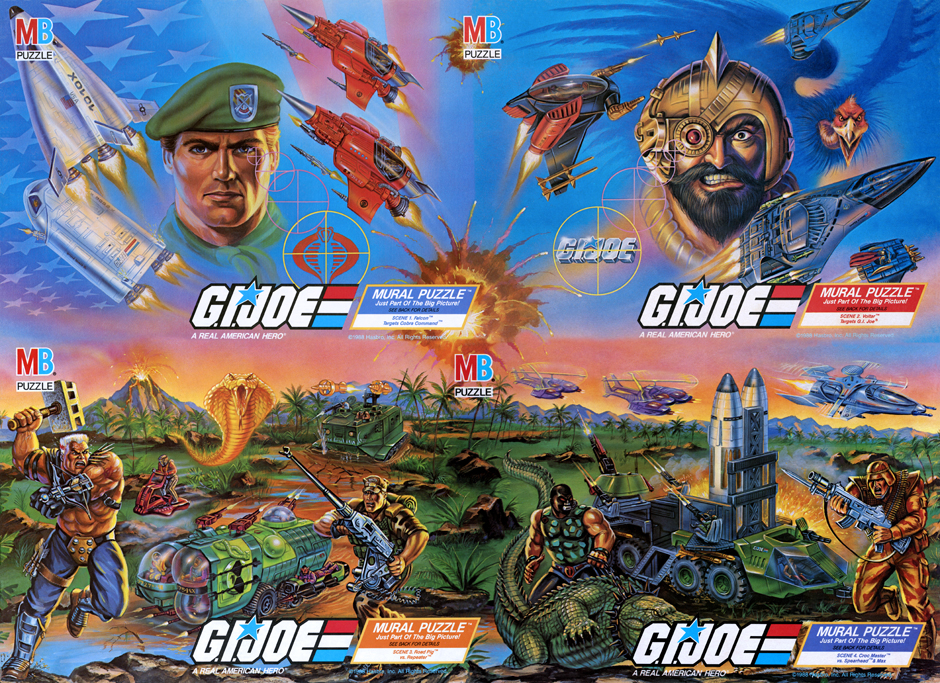 The book archive is bursting with new art!

Hasbro teamed up with Colorforms in 1985 to release "Cobra's Revenge.” This “Listen ’n Play" book included a yellow cassette that you played back while playing with the included Colorforms! Head on over to the “Cobra’s Revenge” page to hear the audio and check out the fully painted art!

Next, Hasbro teamed up with Kid Stuff Records & Tapes once again in 1986 to release "Cobra Strikes!” and "Destro’s Doomsday Auction." Both books included an audio cassette that you played back while reading the book – so you could SEE the pictures, HEAR the story, and READ the book! Head on over to the "Cobra Strikes!” and "Destro’s Doomsday Auction” pages to check out the dynamic comic-book style art by Pablo and Judith Marcos.

Finally, Hasbro once again teamed up with Marvel Books to publish two fully painted G.I.Joe books in 1987. These masterpieces were painted by Earl Norem. Head over to the "Operation Raging River" and "Operation Star Fight" pages to see all of the beautiful art.

Written by Kirk Bozigian from 1982-1984, these newsletters are THE voice of G.I.Joe. They are chock full of patriotism, valor, and good old-fashioned "diabolical marketing." They are also filled with physical fitness and anti smoking messages, great stuff for kids to hear from a brand they idolized. Comb through them carefully and you'll find tons of prototype toys and some pre-production artwork! A HUGE thank you to Page and Greg Wagner and to Brian Kossin for sharing their collections with all of us.

The packaging of G.I.Joe: A Real American Hero was incredibly impactful, and every element served a purpose. This video presentation was developed by Kirk Bozigian and presented by Carson Mataxis. Learn about Kirk's role on G.I.Joe here, and check out every carded figure from 1982-1994 here!

The 1991 Micro Vehicles have arrived!

SEE the pictures, HEAR the story, READ the books!

The 1983 Die-Cast Metal Vehicles are complete!

In 1983 Hasbro partnered with Aviva to release six die-cast metal versions of their classic 1982 vehicle lineup (the JUMP was the only one not recreated). These small, heavyweight die-cast vehicles are highly detailed and feature almost all of the play features of their predecessors. Check them out on the 1983 Die-Cast Metal Vehicles page, under the new Licensed tab in the main navigation bar!

The 1983 Tyco G.I.Joe Electric Train and Battle Set has arrived! 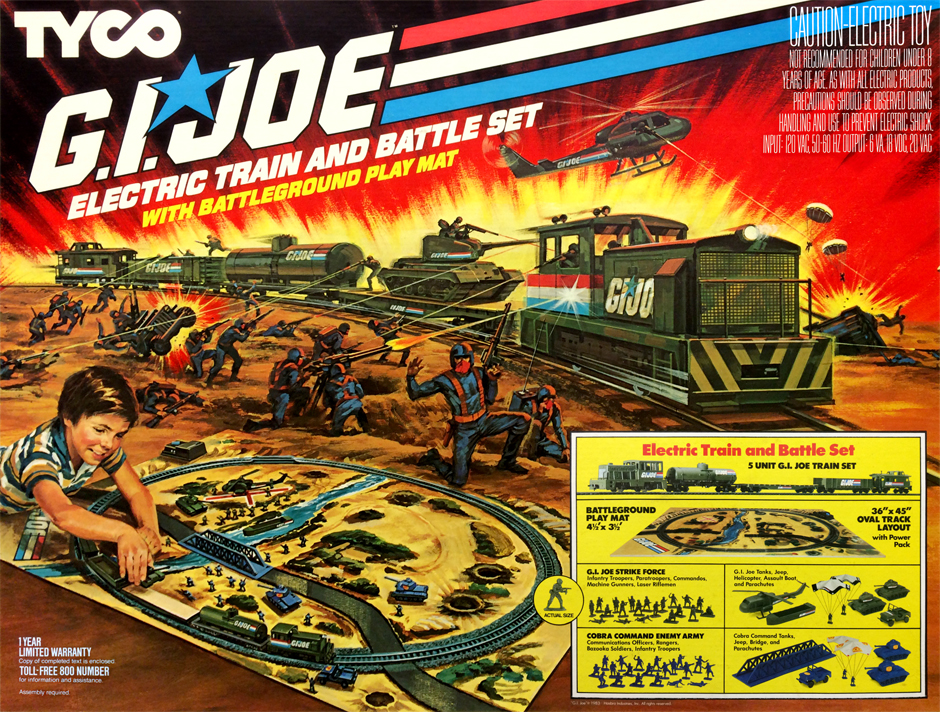 The Electric Train and Battle Set features dozens of vehicles, figures and accessories. The primary attraction is a 5 unit electric train set. Cobra and G.I.Joe each come equipped 26 troops, two tanks and a jeep. The Joes also have a helicopter and a boat, while Cobra has a bridge. The set documented on this page was a MIB sample, so we documented the unboxing for the community to see. This is the most heavily documented item on 3DJoes to date, we hope you enjoy it!

The Battlefield Robots have arrived!

The 1988 Mean Dog has arrived, and it's three vehicles in one!

The Night Force Night Boomer is a rare, highly sought after re-release of the 1983 Skystriker. The Crusader is an interesting mash-up of the Defiant's Space Craft and the Night Raven S³P's reconnaissance jet. The Cobra Condor Z25 is an all original Cobra bomber that splits to become two aircraft. Check them all out over on the 1989 vehicle overview page!

Love G.I. Joe art? Check out all 20 of the painted Find Your Fate covers!

G.I. Joe art of the 80s was the best in the industry. It went well beyond the carded figures, vehicle boxes and catalogs. We have now documented all 20 "Find Your Fate" books, with art by Carl Cassler and Hector Garrido! Be sure to check out the full screen image gallery!

The G.I. Joe Rolodex is complete!

The G.I. Joe Rolodex now features every ARAH file card, from 1982-1994 on one mobile friendly page. Thank you to all of the folks that contributed missing file cards over the last couple years! Find a missing file card? Please let me know via Twitter or Facebook.

The "Catalogs and offers" section has been completely upgraded!

Dozens of new catalogs and offers have been added to the 3DJoes print section! We have now documented almost every single catalog and offer from 1982-1994, thanks to a huge loan from Tim Dz. Some of these have never before been documented! Additionally, we revised all of the large pieces adding image galleries that allow you to read every bit of copy and marvel at all of the illustration and photography. Head on over to the catalogs and offers page and get ready for hours of nostalgia!

The last two 1986 vehicles have arrived and 1986 is complete! Be sure to check out the detailed image galleries on both pages.

Battle at sea! The 1985 Cobra Hydrofoil and Transportable Tactical Battle Platform have arrived.

The Cobra Moray (AKA Hydrofoil) roars into sight with its V12 engine at full boar! It is loaded for bear with four Eels manning the 30 cal rear mounted machine guns and Firefly on the 23MM twin-barrel cannon. Never fear, the Transportable Tactical Battle Platform stands ready to defend against the evils of Cobra! It holds tons of figures and small vehicles and has enough play features to keep you entertained for hours. Be sure to check out the detailed image galleries on both pages! 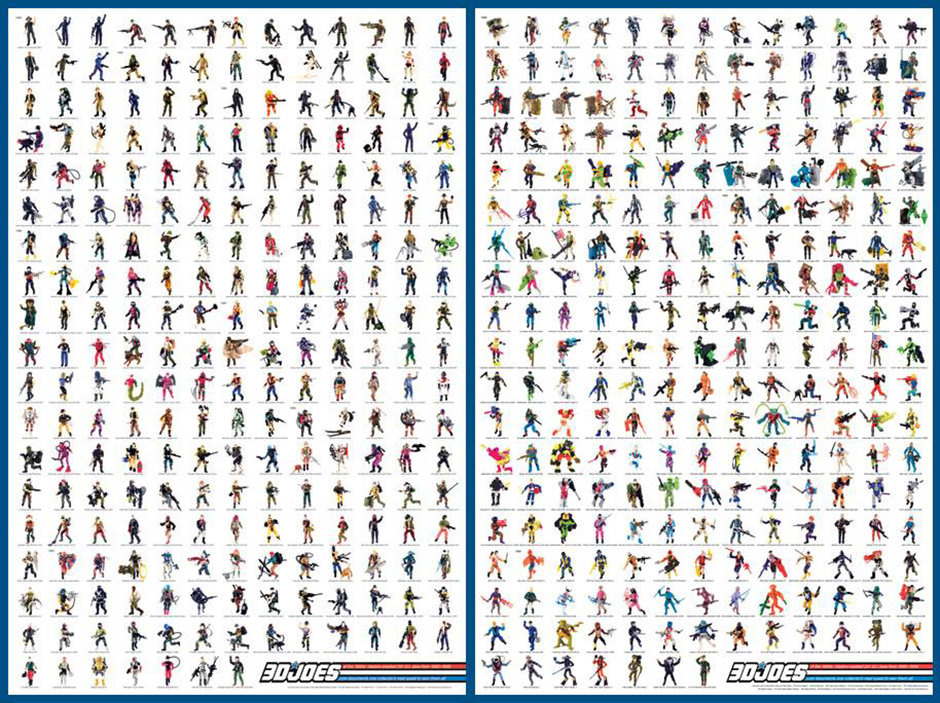 Keep an eye on Zartan!

The Sideshow Collectibles Flint VS Zartan diorama has arrived and it is incredible. I utilized some video editing tricks, combining the normal statue with the camouflage exclusive statue, so that Zartan transforms in front of your very eyes!