​Below, Guy discusses the normal two year production timeline for a G.I.Joe vehicle or playset, and why the Mobile Command Center took three years. Guy recalls the model build as extremely challenging, taking 12 weeks. Frank Coroneos came onboard toward the end of the design phase and helped finish off the accessories. Guy recalls "It was too big for one person." He also reveals some easter eggs on the decals.
​The cost input drawing below was drawn by Guy, but it shows a British inventor's design. Guy was tasked with creating a toy from this idea. Note how the input drawing shows a telescoping driver's cabin, and the second illustration gives us a more detailed look at this idea. The British inventor
​whose idea was used to create the MCC received a royalty check from Hasbro. Guy's revised MCC design was influenced by the Jawas' Sandcrawler
which first appeared in Star Wars: Episode IV - A New Hope in 1977. Roll over the images below to find out more, or click the images to enlarge them.​ 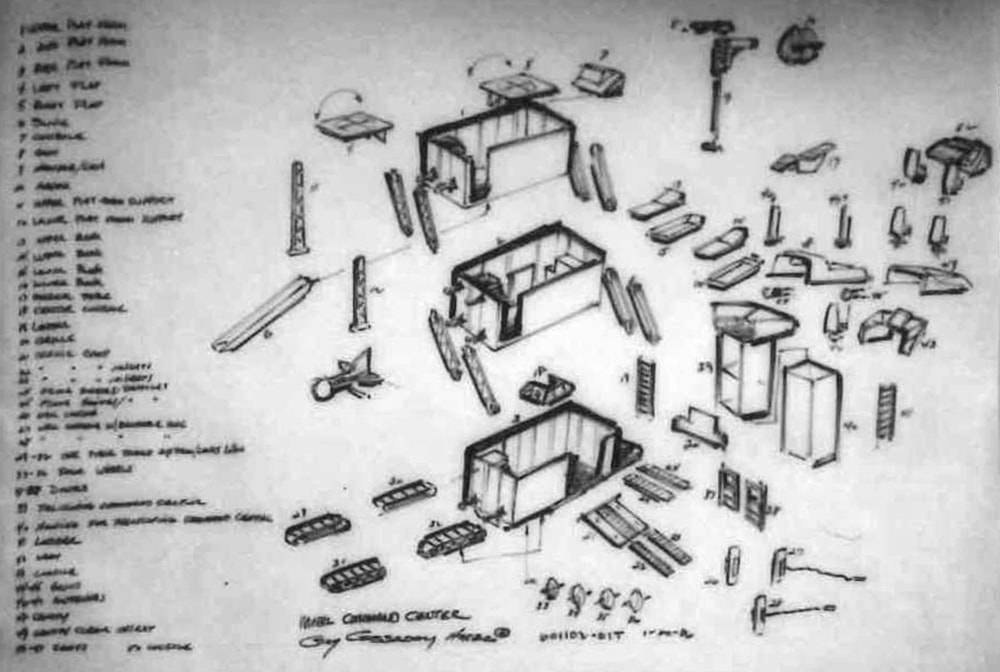 This cost input drawing was drawn by Guy, but it shows a British inventor's design. Guy was tasked with creating a toy from this idea. Note how this input drawing shows a telescoping driver's cabin. 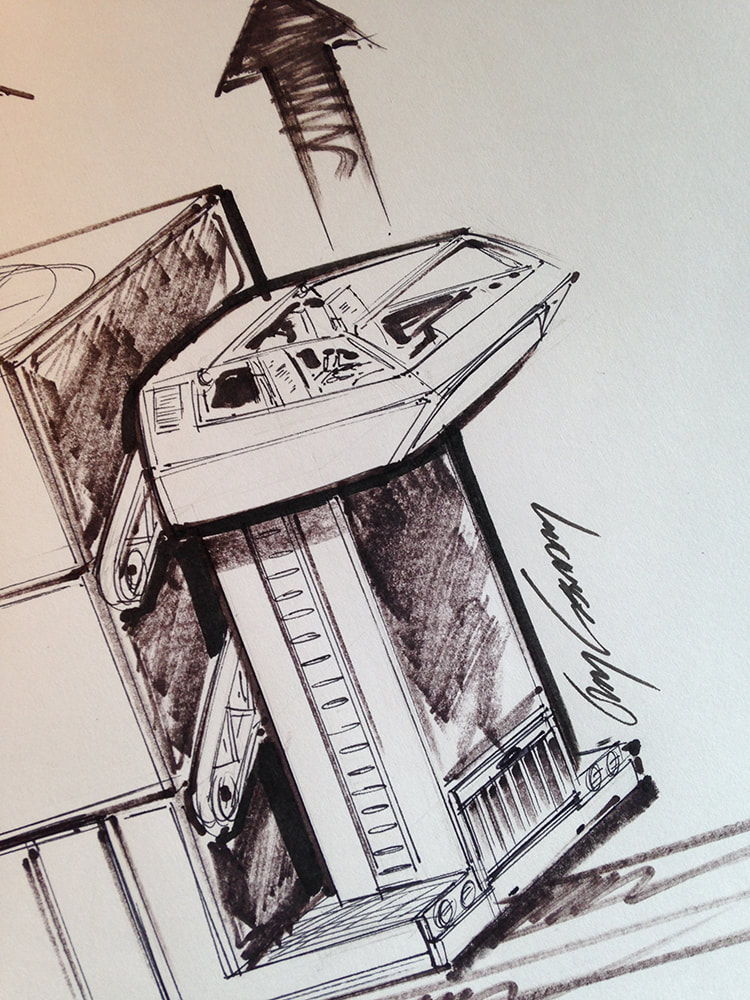 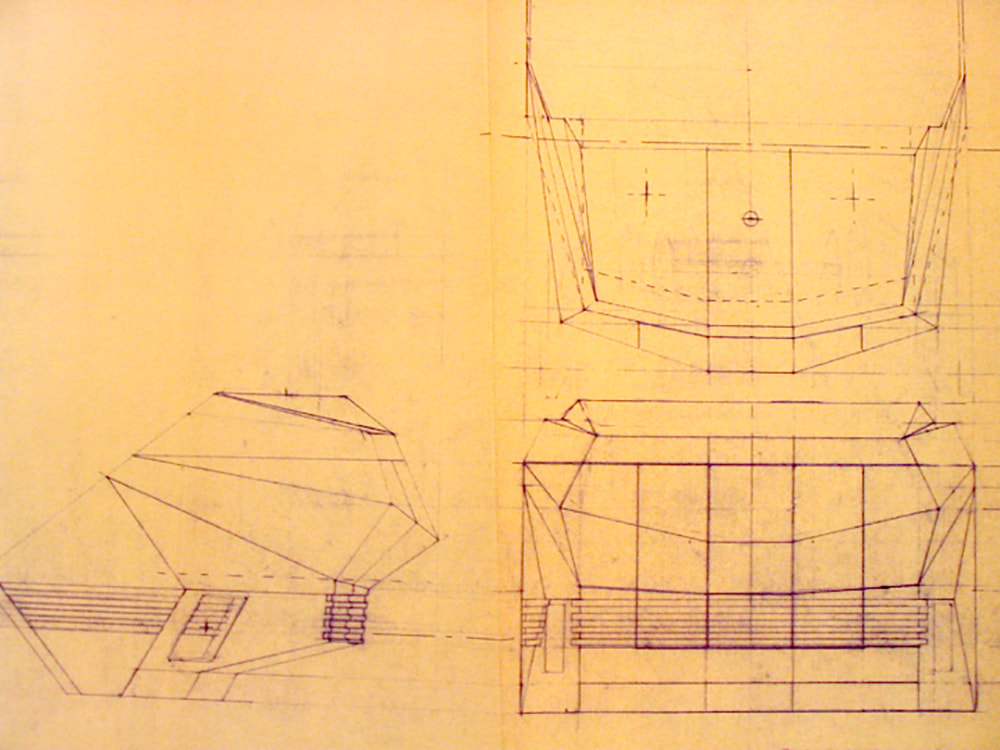 This illustration shows the revised driver's cabin.
​The illustrations below are called color studies. The designer would typically photocopy their black and white line art, and then quickly create 5-10 different color options using colored markers. They would then review these with management and pick a direction. Click the images to enlarge them.​ 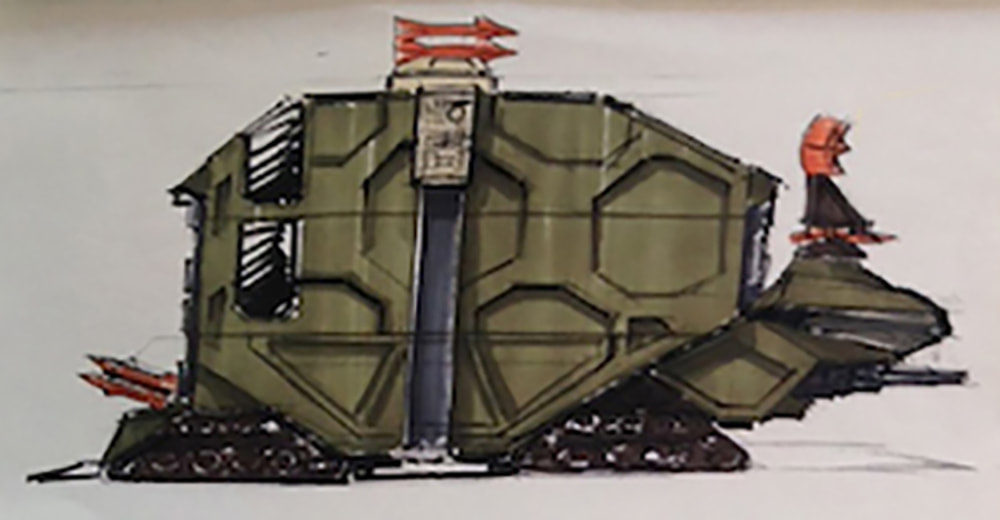 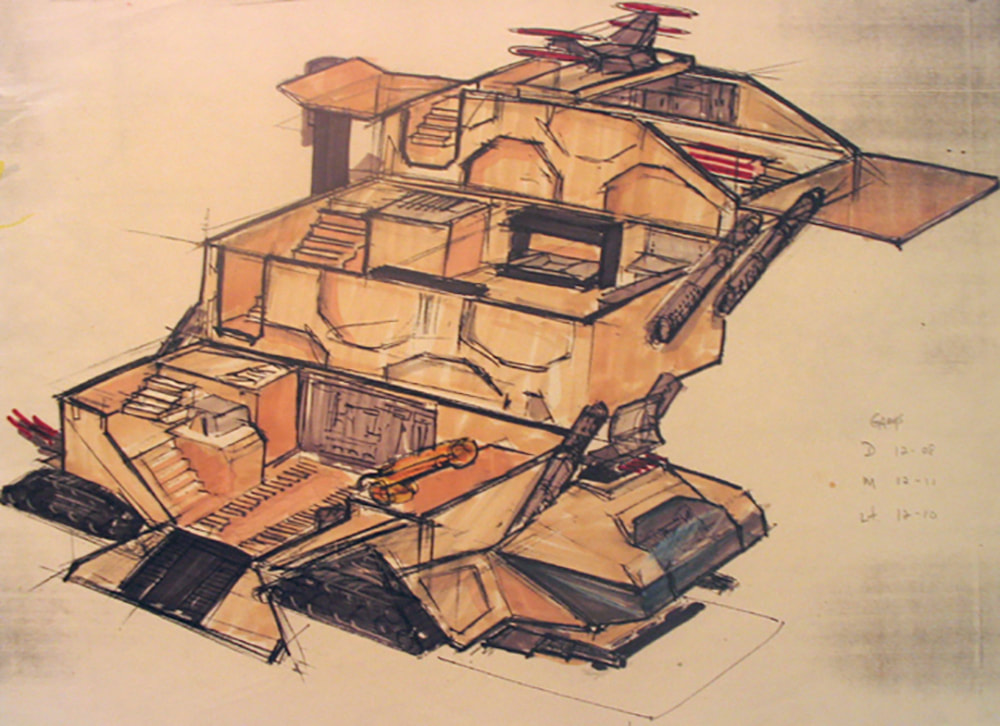 The Polaroids below show the completed prototype, designed and developed by Guy Cassaday. The Persuader costing model was used for scale. 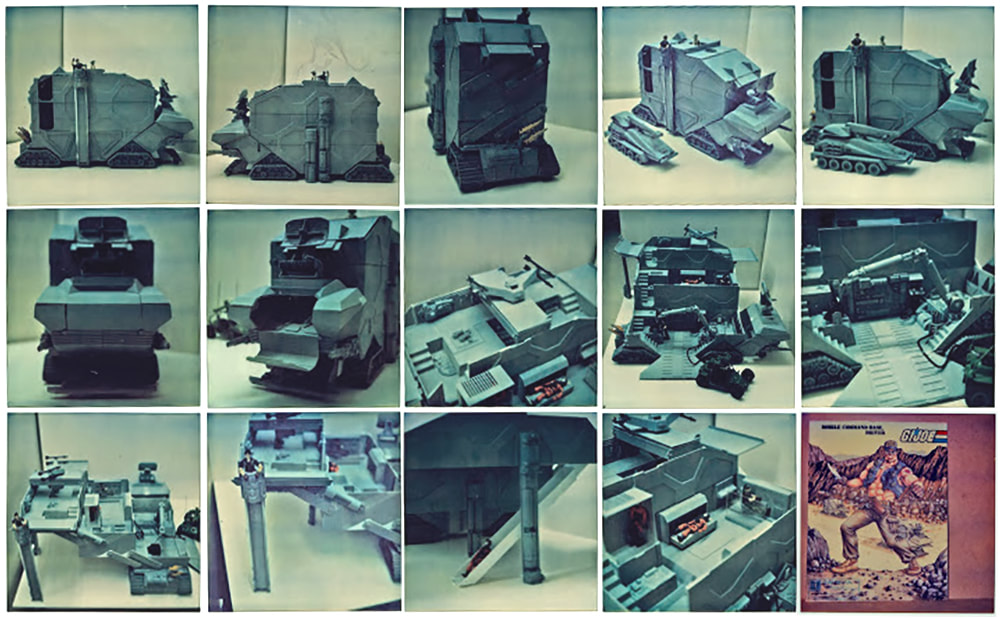 ​
The art below was art created for a licensee to use on a non-toy product. Note the unreleased green color scheme. 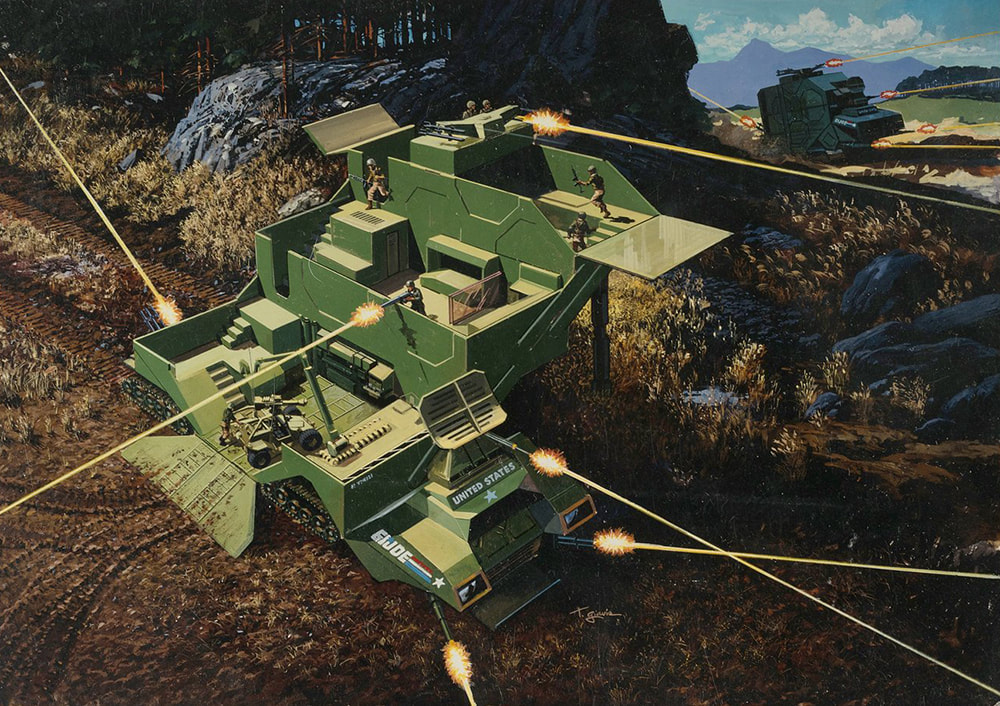 ​The image below left shows a pre-production Mobile Command Center that appears to be dark green. We asked Guy about this photo. Guy recalled that he "pushed for the color tan, as you might see in Desert combat scenario." Guy recalled that the gentleman on the right worked in the model shop. "I enjoyed working with him."  He also remembered Jeff Thompson as the gentleman in the red shirt and said he was "funny as heck." Jeff worked on Air Raiders, maybe Inhumanoids, and other boys designs." Image source: Tristan Rudat's Code Name: Blast Off trailer (seen below right).
​The 1987 Mobile Command Center made its debut in the 1987 Toy Fair catalog, seen below. Click the images below to enlarge them. 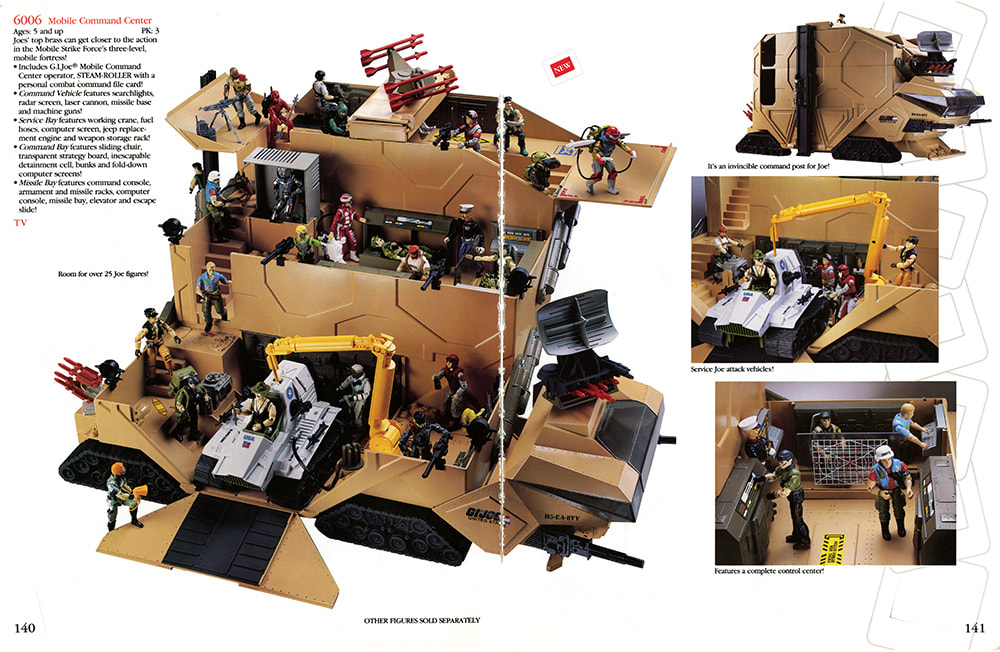 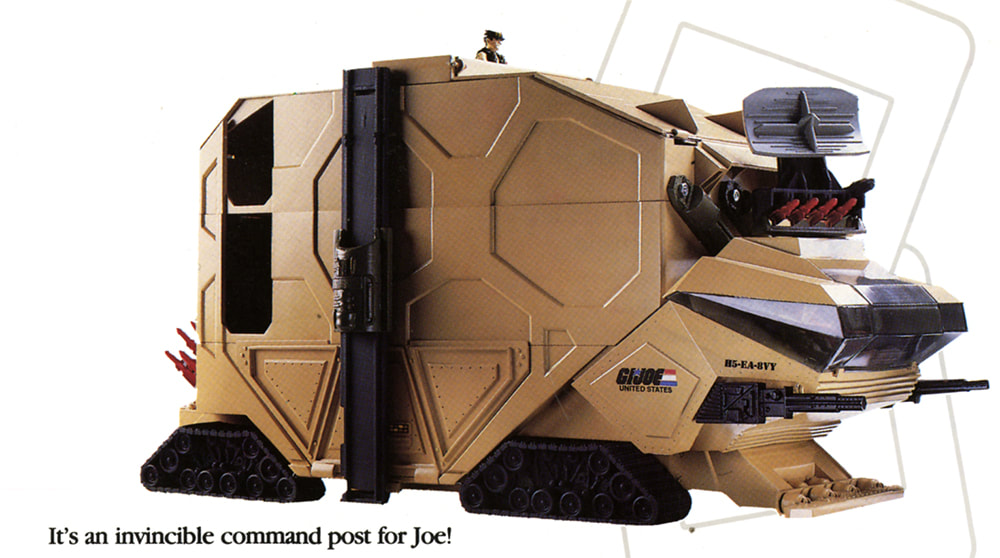 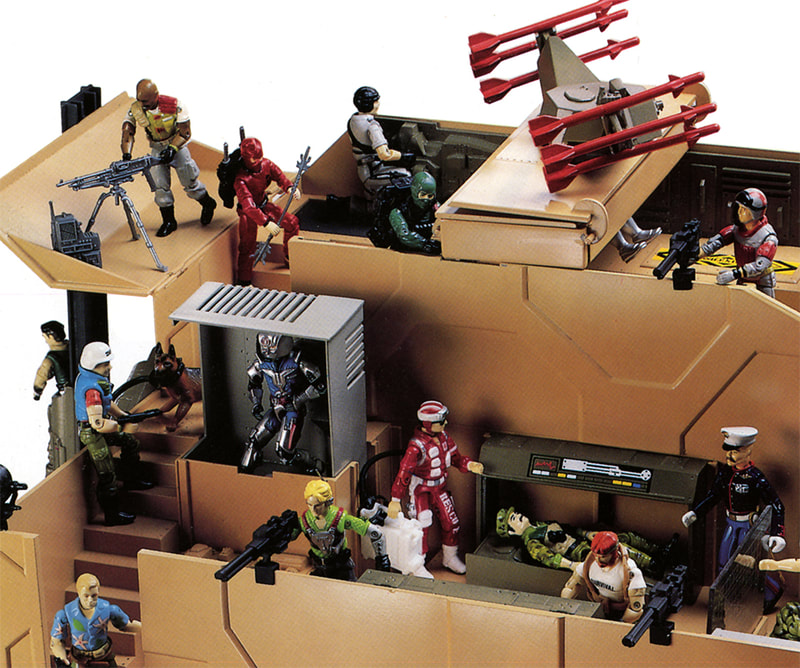 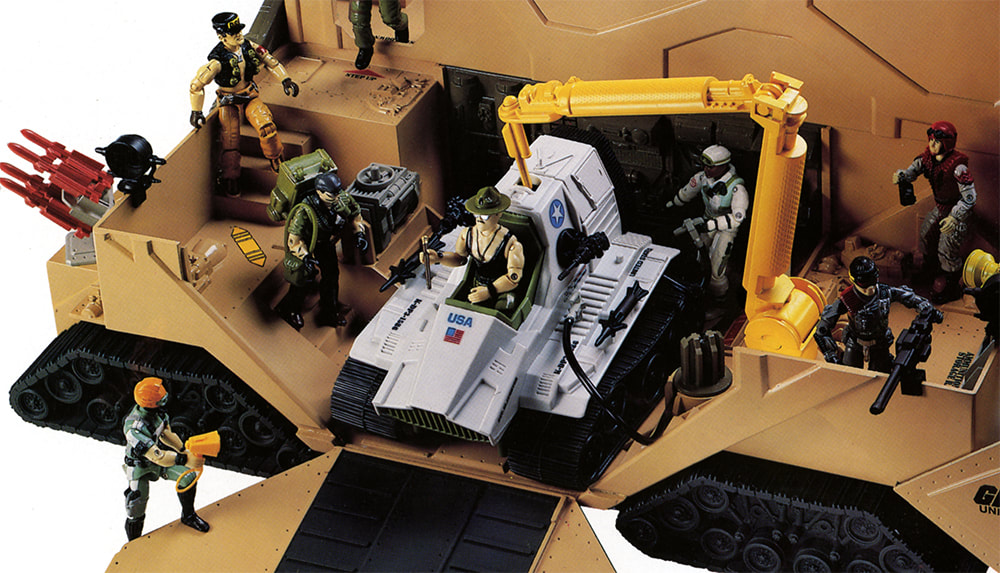 The lower level houses the service bay, shown with an optional Triple-T. 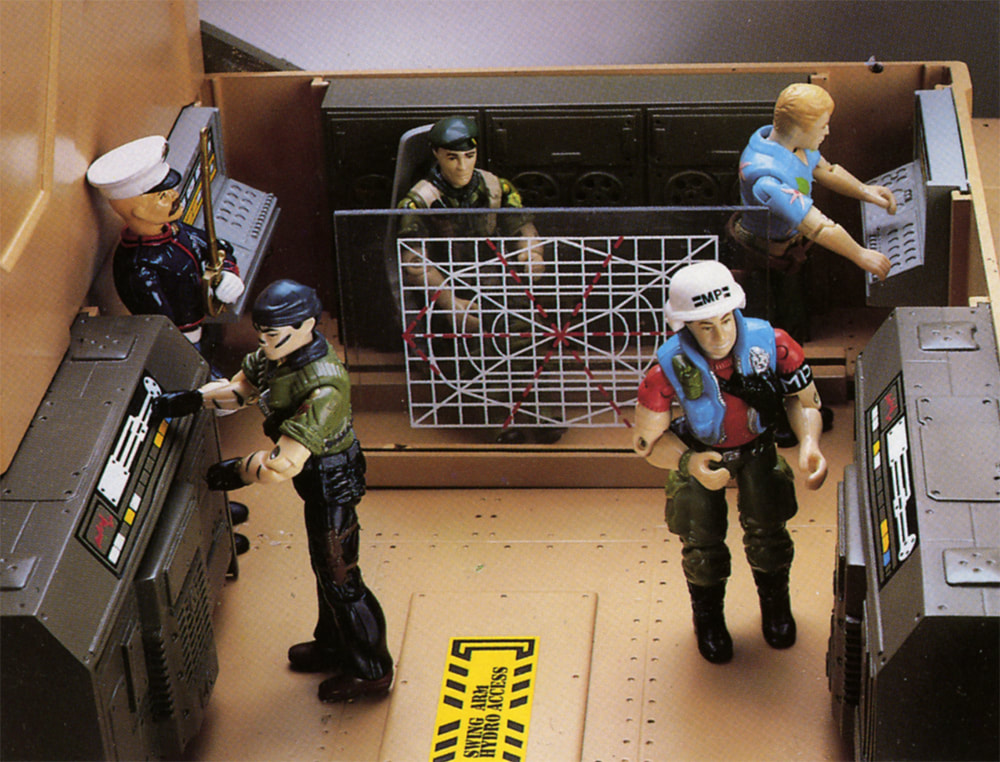