The Modular Armored Range Vehicle (MARV) is the first original product from Wayward Goat Collectibles. The MARV is a 1:18 scale vehicle designed for use with your favorite 3.75"-4" action figures. Each MARV features a high level of detail, moving parts, and interchangeable accessories.

The MARV seen on this page is a Test Shot, or a Final Engineering Prototype (FEP). This MARV meets all requirements for function and quality and includes all features and functionality. This plastic manufactured sample was formed from the same metal mold that mass production will use.
The MARV has been in development for years! The rendering below was created by G.I.Joe Legend, Guy Cassaday to help roll out the MARV. 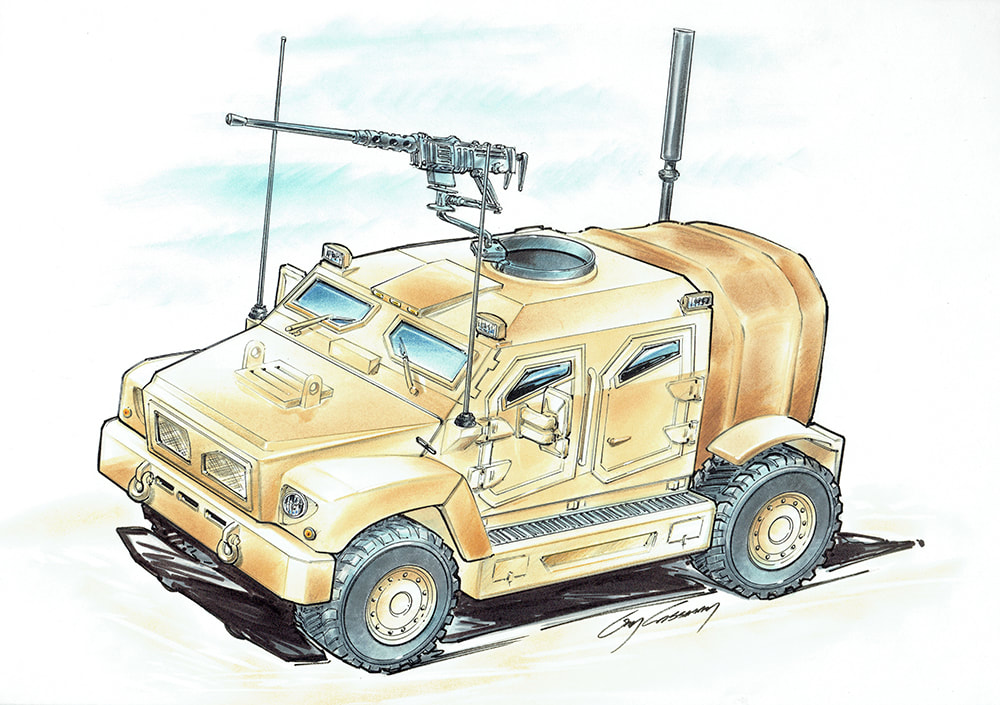 MARV features several moving and removable parts, and the sculpt is incredibly detailed! Roll over the images below to find out more, or click the images to enlarge them. 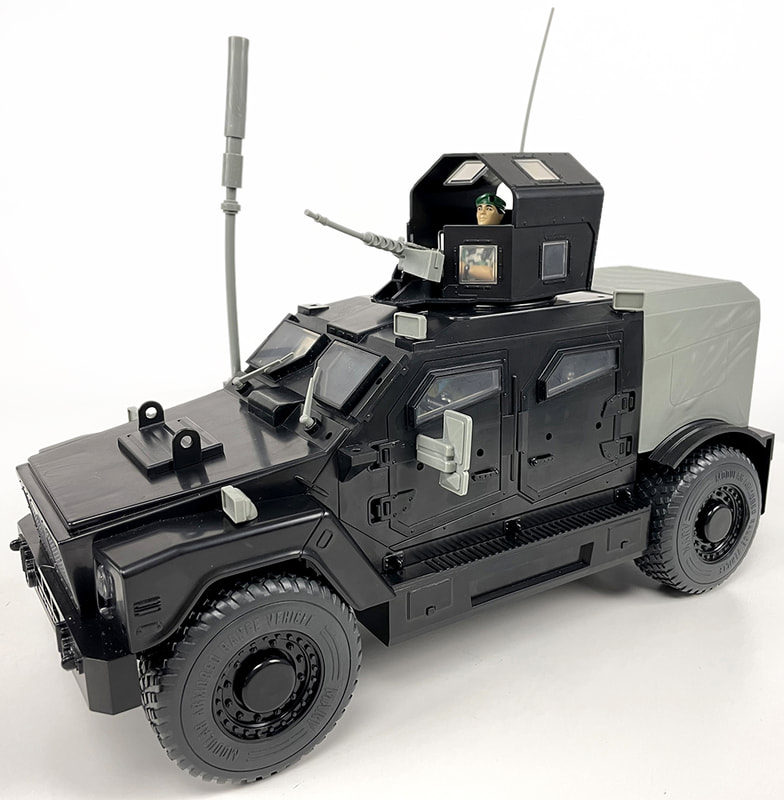 The turret can rotate a full 360 degrees, while the machine gun can also rotate and elevate. 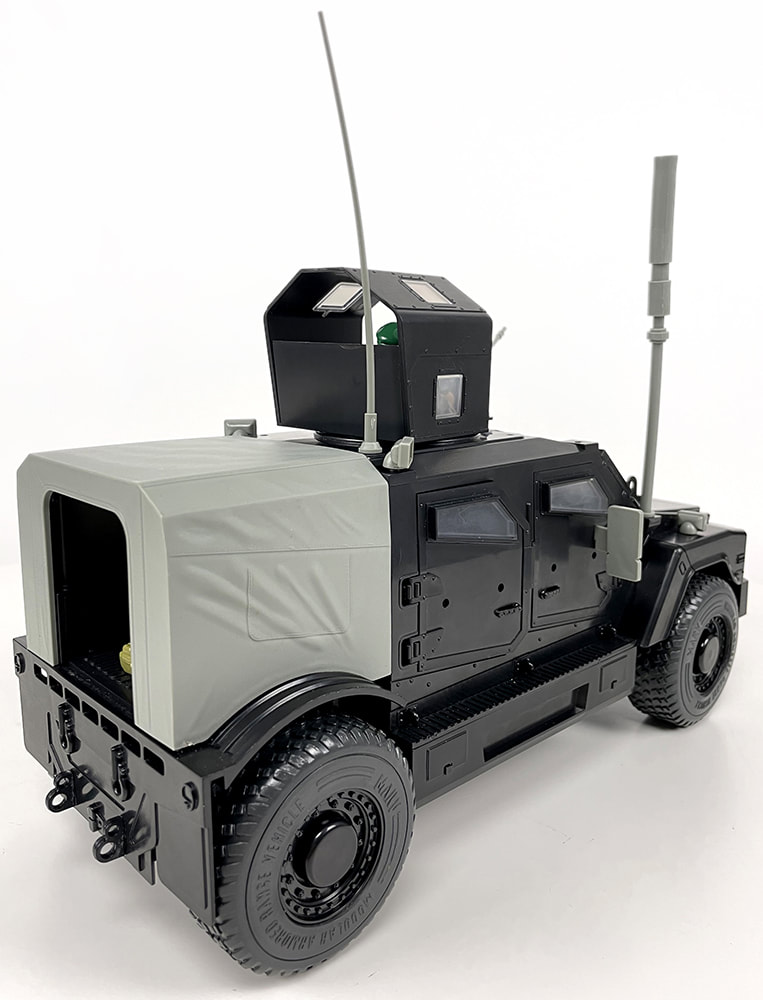 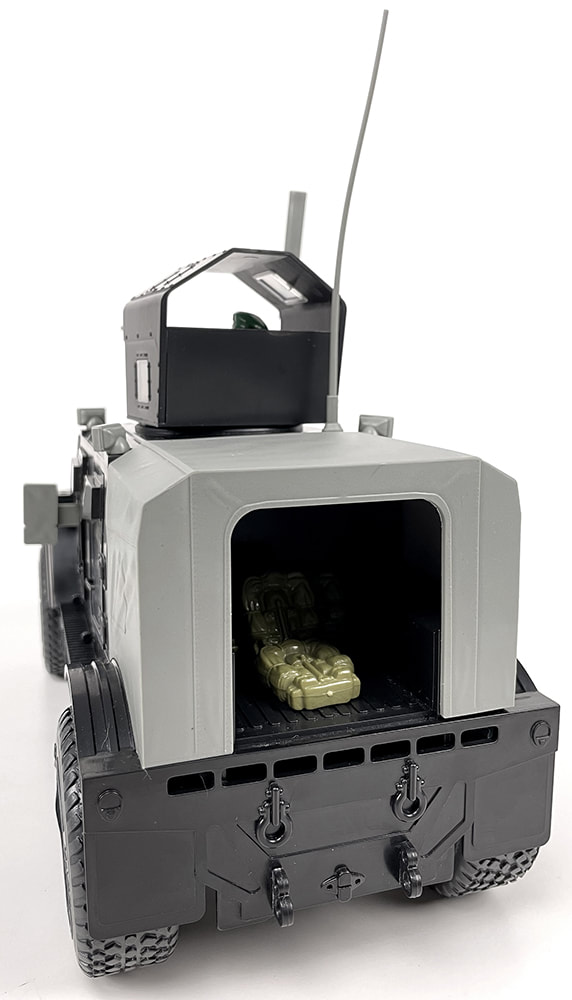 Larger accessories can be stored in the rear bed. 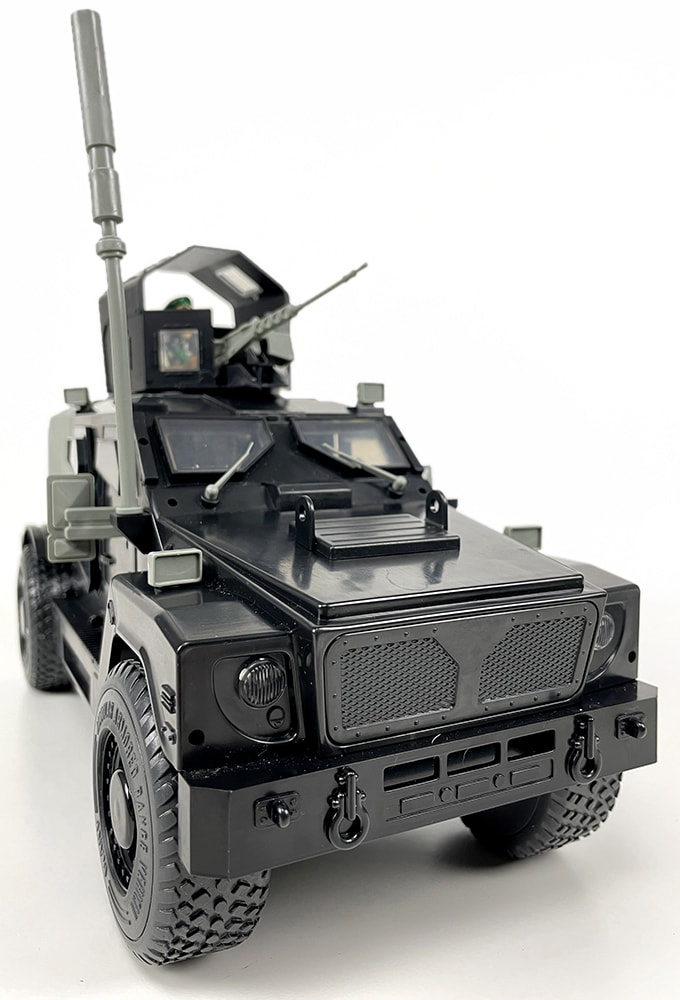 The front headlights use clear plastic. The level of detail here is incredible! 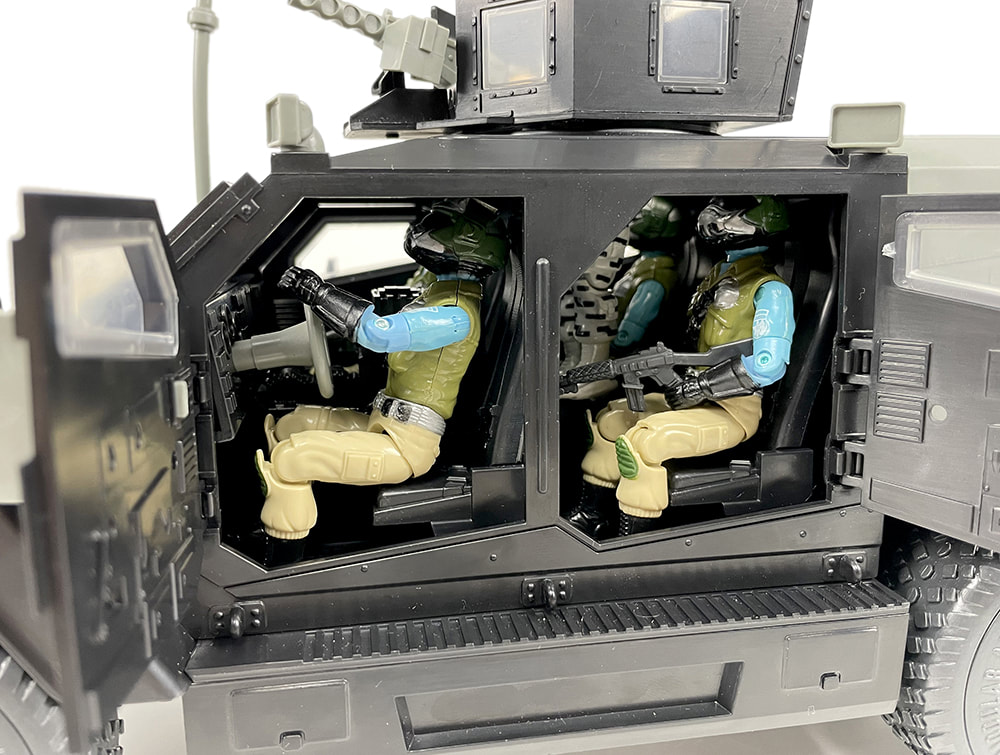 Opening doors lead to a highly detailed functional cab. A firing squad of four can fit inside, plus a fifth in the turret. 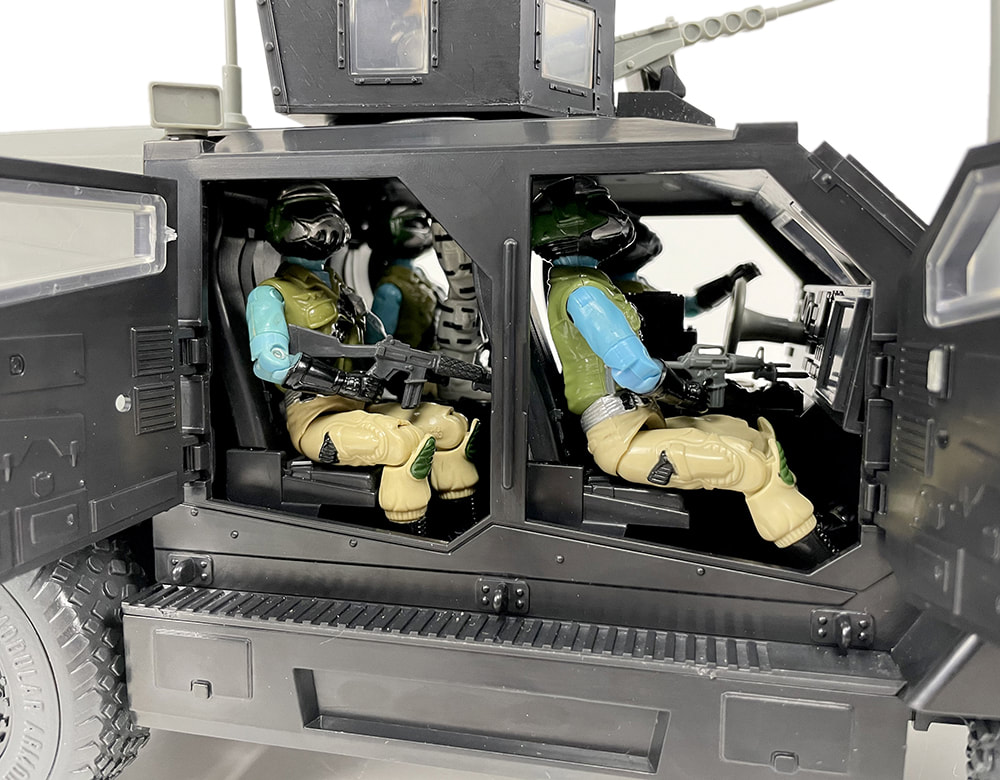 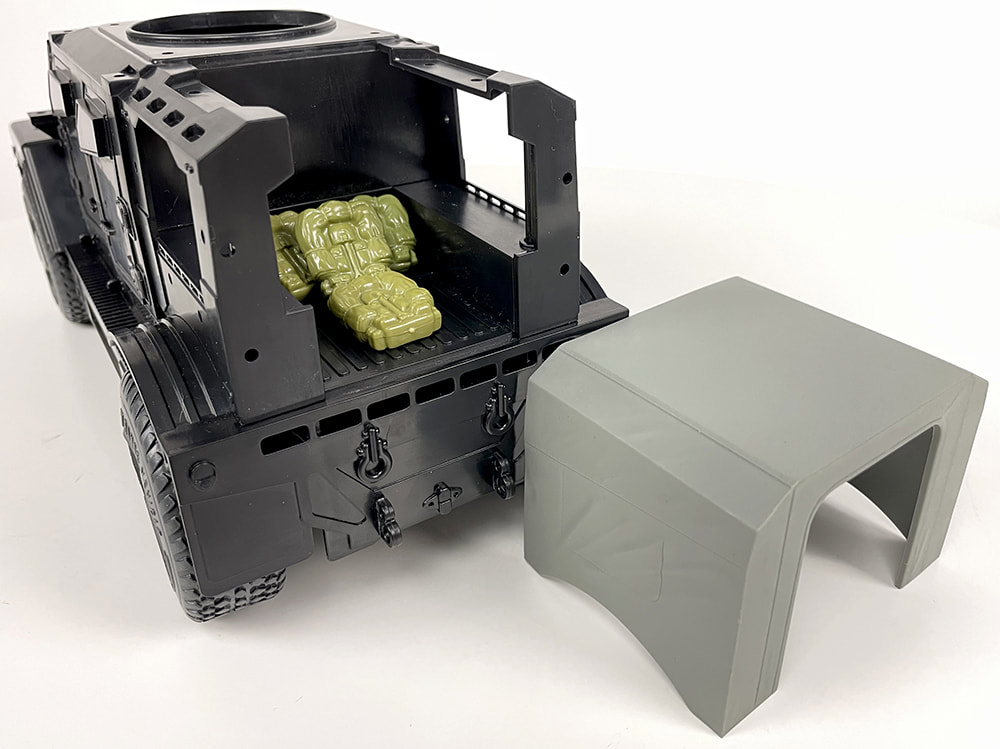 The rear bed can be uncovered to reveal a perfect storage area for accessories and gear. The plastic cover piece has even been sculpted to look like real canvas. 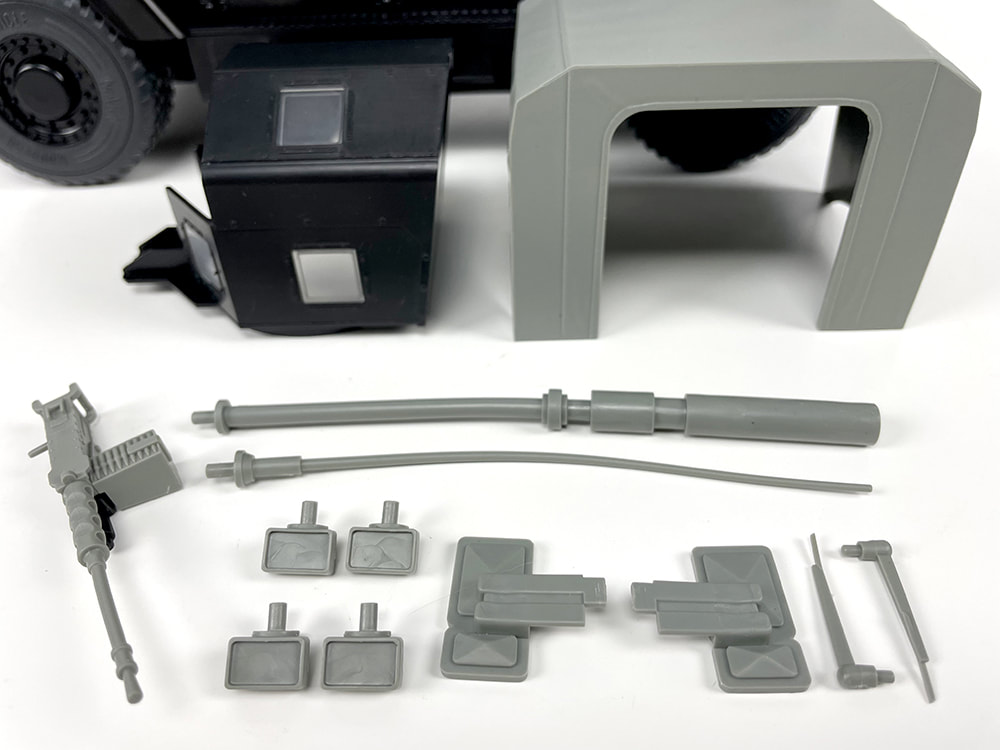 Customize the MARV with removable and interchangeable pieces! 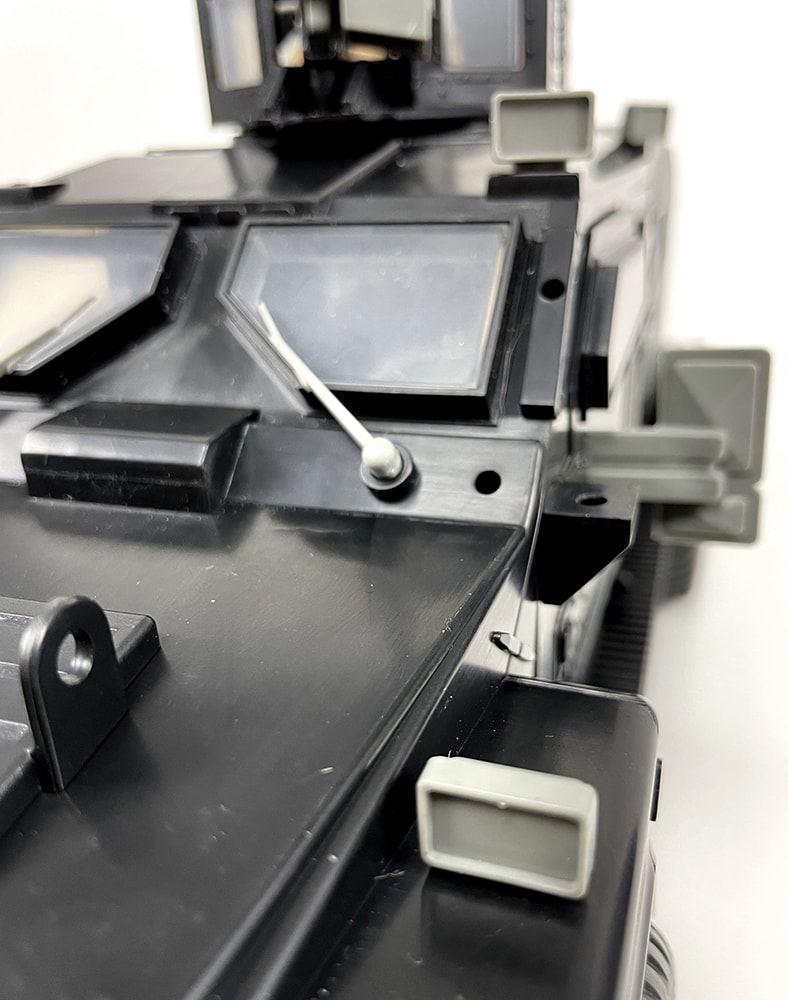 Pieces can be removed and placed at different locations using alternate mounting points on the MARV. Windshield wipers and lights swivel. 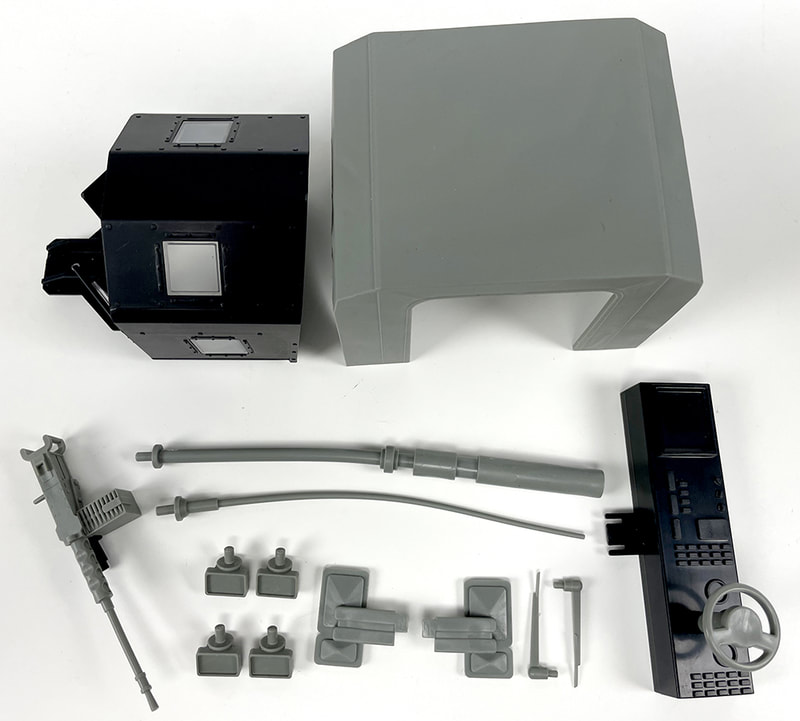 MARV includes two interchangeable dashboards, one with the steering wheel on the left and one on the right, so MARV can be customized as a region-specific vehicle. 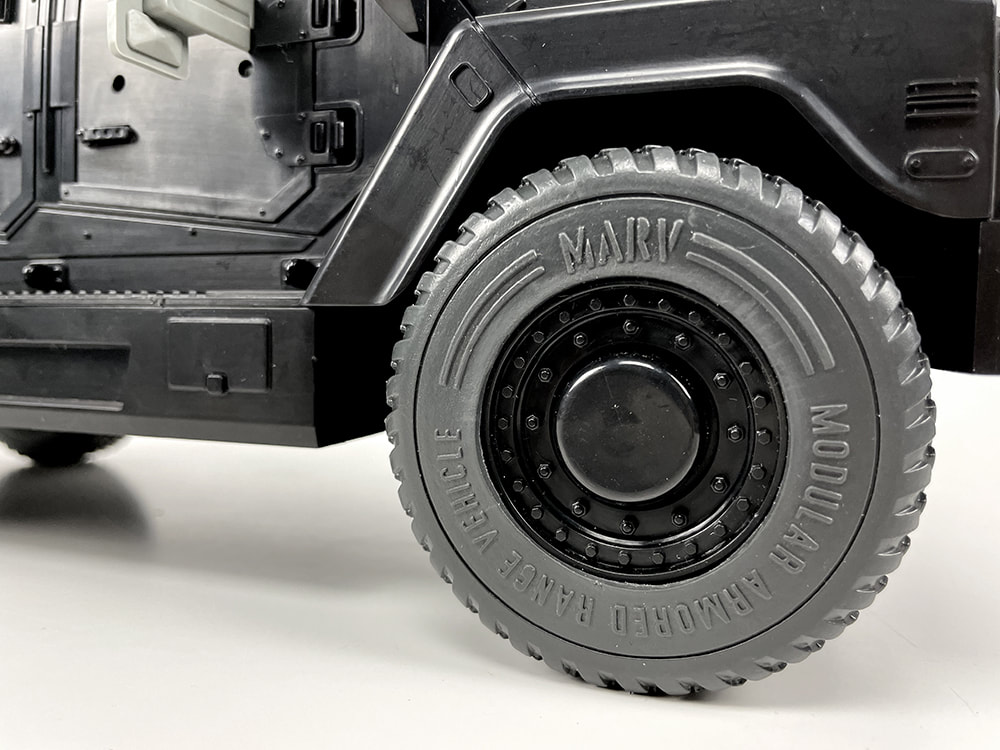 The free rolling wheels feature separate tire pieces made with soft plastic for a realistic rubber look and feel. 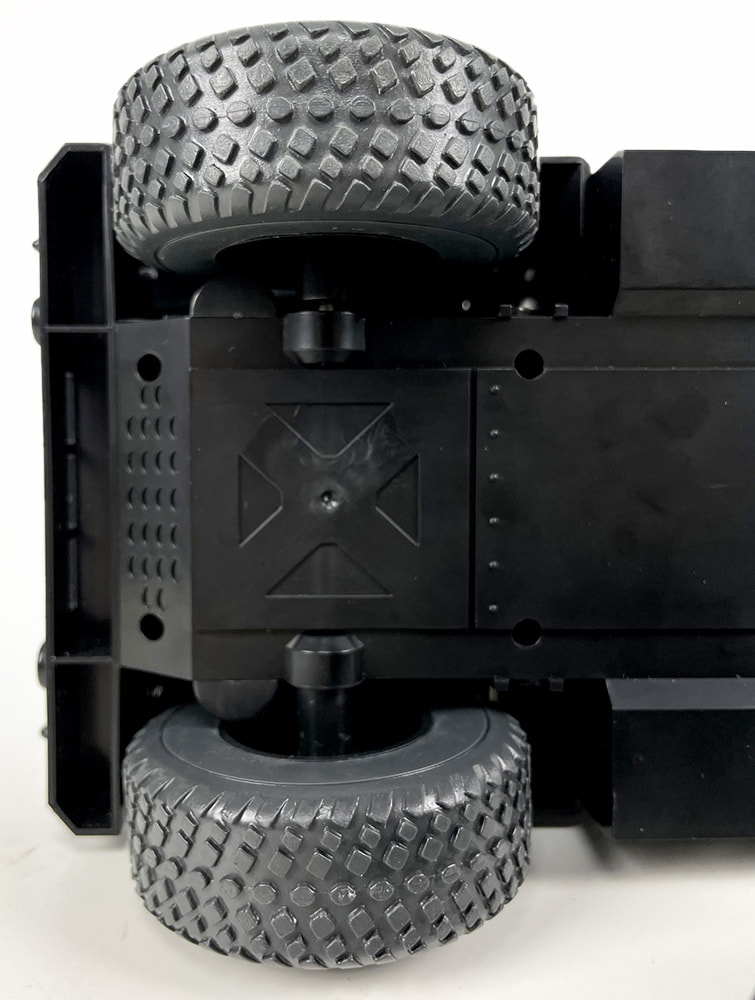 Tires are detailed with writing and tread patterns. 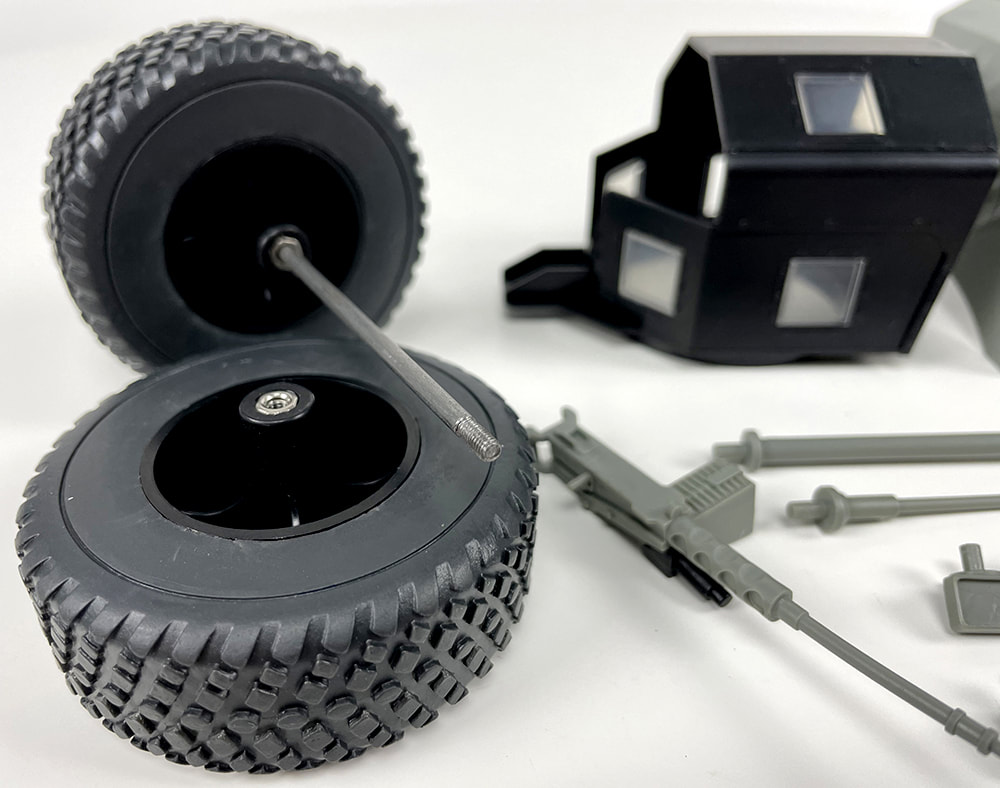 Tires screw onto the axle, and can be easily removed for storage. 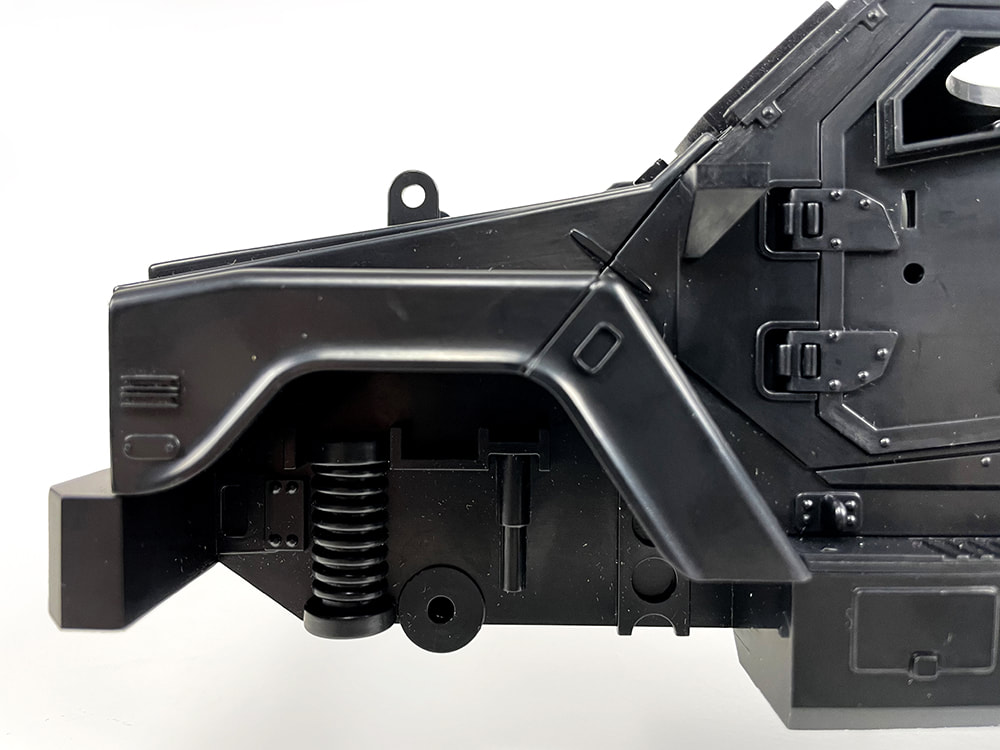 The MARV is incredibly detailed, as you can see when removing the wheels. 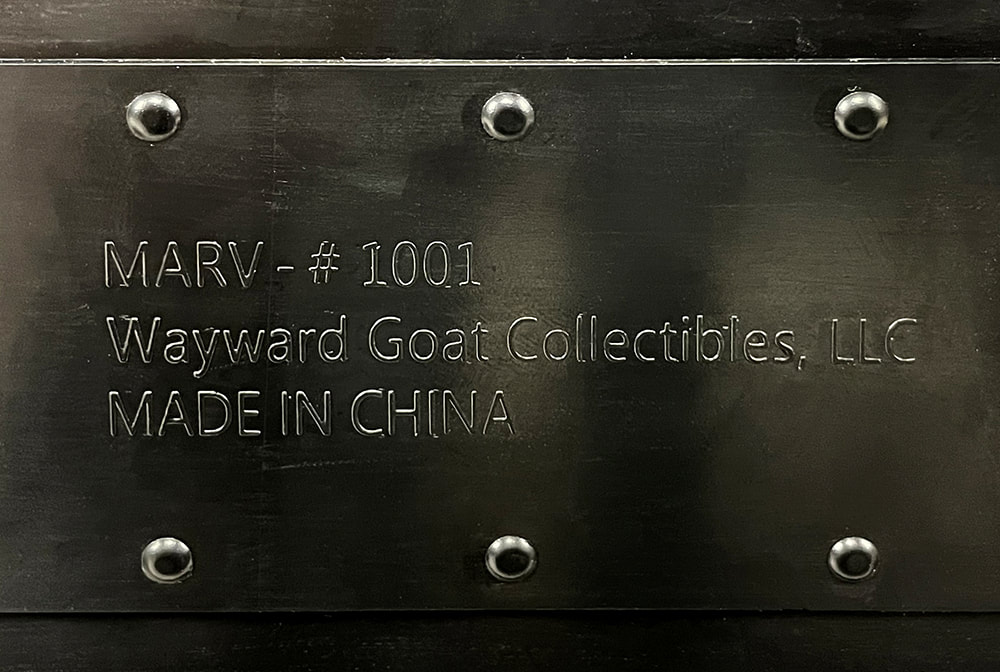 WGC is really swinging for the fences here, mass producing these in China. This is not some fly by night 3D printed dream, MARV is real and MARV is coming soon! 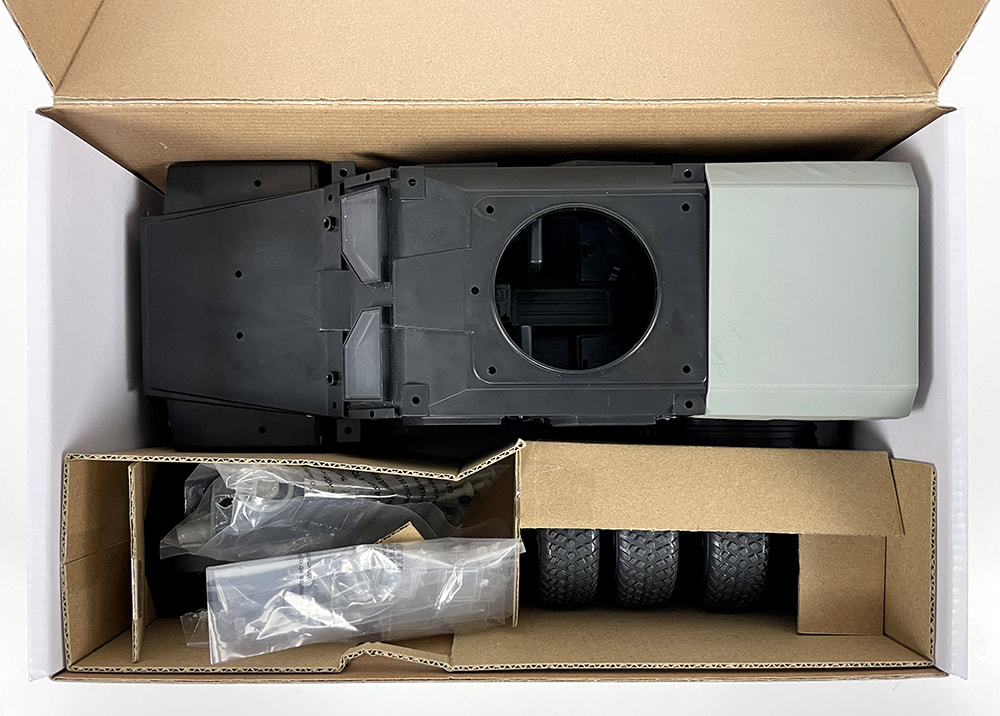 The MARV packaging will be a closed-box design. Main body pieces will come assembled, while smaller snap-fit pieces will be bagged.

Who's ready for MARV?! We are. 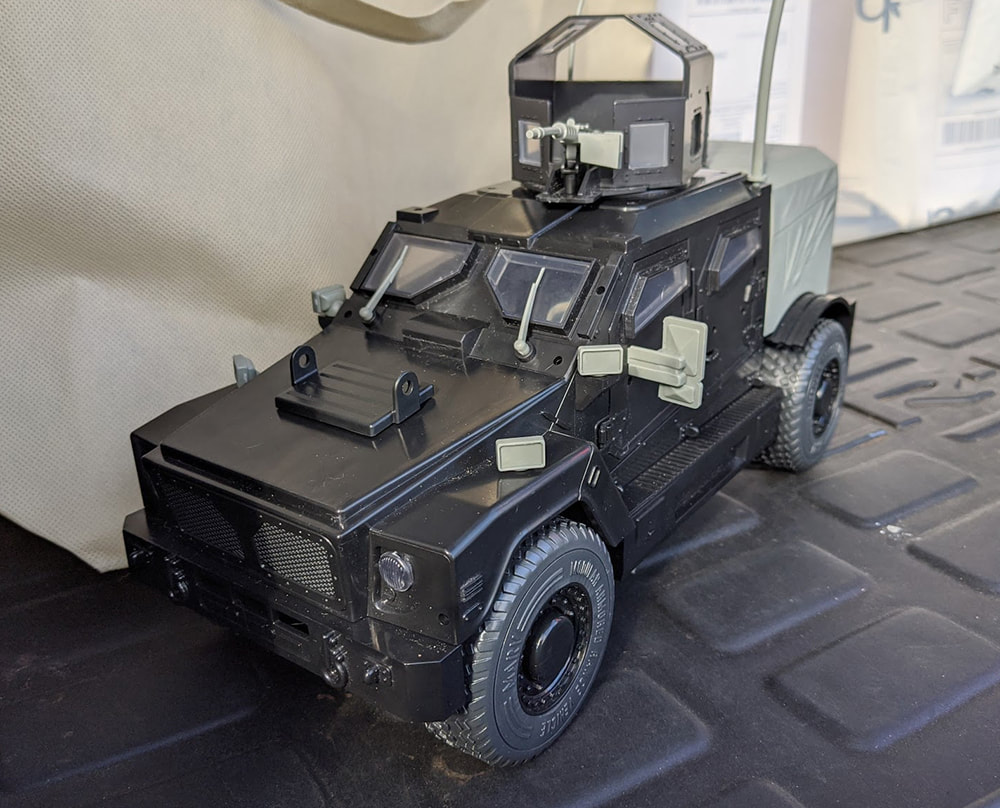 Here are my thoughts on the MARV after a surprise hands-on with the newest test shot. Wall of text incoming. I’m a teacher, so I have no remorse.

​First, I am not affiliated with Greg Bridgeman or Wayward Goat Collectibles in any way other than as a customer and a fan. I have no financial stake in this project other than a desire to see it succeed, purely because I have always believed that my favorite aspect of collecting 3.75” military figures is the vehicles. I occasionally purchase things (Marauder figures!) from Greg, and he is kind enough to meet me face-to-face either at toy shows in my local area or at a meeting location which is convenient for both of us. This is exactly what happened yesterday, as he agreed to meet me so that I could pick up several items which I had purchased from his online store. I had no idea that he had a MARV test shot with him, and I’m thrilled that he wanted to share it with me. I had originally seen his plans for this project about 2 years ago, and I have been a staunch supporter of the MARV ever since seeing the first sketches. I did ask him for permission to talk up the test shot a bit, and he said that it was OK.

Second, I got to go hands-on with the test shot for about 10 minutes. I was in such a state of surprise that I only thought to take one photo. I do not want to steal any of Greg’s thunder with this project, but simply want to provide some (enthusiastic) feedback for what I got to see. I probably embarrassed myself with how excited I was over both getting to be one of the first people to handle the test shot as well as being so amazed by how well it turned out...

Third, get ready to be absolutely blown away. I don’t know how I can say this without injecting my own bias, but I think that anyone who is searching for a high-quality transport/assault vehicle for their 3.75” military figures should immediately direct attention to the MARV if it’s not already on their radar. It just checks every box for me in terms of aesthetic design, build quality, durability, attention to detail, and lasting play value. I love that it’s a more realistic MRAP-type design which could integrate with just about any 3.75” modern military action theme.

Thoughts, in no particular order:
• The test shot shared with me was the black color mold. Greg informed me that he’s aiming to have 4 different color variations. (I have been anxious for an olive drab green version ever since I first saw the design sketches.)

• The plastic quality of the test shot is reminiscent of the original ‘82 run of the Hasbro VAMP. It’s the best single analogy I can come up with. This is not 3-D print quality stuff. I would feel confident handing a MARV over to my 4-year-old and letting him play with it - after I removed the swappable accessories, that is! I could clearly imagine that he could drive it off of a couch onto the carpet floor, and the MARV wouldn’t take a scratch. The fully-equipped vehicle weighs around 3lbs., I was told.

• Window glass! And articulated windshield wipers! Well, it’s plastic, but still! Having clear plastic in viewports where one would expect there to be bulletproof glass is just such a nice touch. The “glass” is clear enough to be able to see figures inside of the cabin, and I was told that it will be glued on the retail version.

• Attention to detail and cleanliness in the mold is very high. There was no sign of plastic “flashing” or sprue marks anywhere that I could find. The instrument cluster is clearly visible (and even swappable for right-side drivers!), the ammo belt in the box for the roof gun shows individual rounds in the chain, and the seat belts on each seat even show buckles. There are recessed handles for each door, and the doors close flush against the main body.

• There are versatile and discreet peg holes placed in strategic locations on the vehicle which allow for spotlights, antennae, backpacks, and other accessories to be placed wherever you see fit. This aligns itself perfectly with the Marauder design of modular accessory placement. If you want to, you can change your look/loadout based upon what kind of “mission” you feel like running. This extends the play value of the MARV in a dramatic way.

• Seating capacity in the main cabin is for 4, plus one gunner standing in the turret. I could envision getting 2 more comfortably in the rear of the vehicle, and maybe even 4 if you tried. (I wonder if a PAC RAT would fit back there? How cool would that be?)

• The turret on top is able to turn 360 degrees, and the entire cupola can be removed if you wish. Greg discussed the possibility of eventually having options packages such as a hatch, remotely operated weapons system, and other add-ons. (I really would like to see a Mk19 grenade launcher or a TOW system.)

• The “ragtop” rear cover is removable, and there are plans to hopefully have available a “hardtop” armored cover. There is plenty of room in the back to store accessories or other troops.

• The tires on the test shot were a different color than the body of the vehicle, and this is a nice touch to differentiate them from the color of the wheels/hubs. The texture is a softer rubber-like plastic than the chassis. The treadmarks on each tire are extremely clear, and I can imagine that they’d leave nice lines in the sand. Each wheel is connected by a screw-removable axle, which is helpful for storage or maybe even swapping around different color wheels with different color chassis.

• The underside of the chassis is stamped with “Wayward Goat Collectibles.” This is a nice touch for a custom project.

• Price point for this vehicle is something which I’m a little reluctant to discuss, as I am not the one setting the mark. But, from what Greg shared with me, it will be quite reasonably priced for what you will receive. I was actually prepared to pay more than double what may be the price point for this, and that’s saying a LOT since I’m on a teacher’s salary with two kids, a mortgage, and car payments. I have to be very discerning as to how I spend my money on toys, but the MARV is a no-brainer for me.

​It’s a lot to process, but this project genuinely feels like a labor of love. I am thoroughly impressed in every single aspect. Greg alluded to the hope that if the MARV succeeds, there are other vehicle projects planned for the future. I really hope that anything which I have said here will help to encourage people to support this project, as it feels like a modern gold standard for me as to what I would hope to see out of a 3.75” vehicle. While I can try to answer any questions which you may have about this, it’d probably be better to direct them to Greg Bridgeman at Wayward Goat Collectibles.
​*This review was posted by Eddie Cobb on the Marauder Task Force Facebook group on December 19, 2020. It is re-published here with his permission.